This is an article from Curious Kids, a series for children. The Conversation is asking kids to send in questions they’d like an expert to answer. All questions are welcome: find out how to enter at the bottom. You might also like the podcast Imagine This, a co-production between ABC KIDS listen and The Conversation, based on Curious Kids.

Who were the Spartans? - Trystan, a young reader who left a comment on an earlier Curious Kids article republished by the ABC.

The Spartans were the inhabitants of one of the largest and most powerful cities in ancient Greece.

Even in ancient times, the Spartans were famous for the way they lived. From a very young age, Spartan children learned to fight and practise rigour, physical fitness and obeying orders. They also staged pretend battles.

This kind of formal training, called agōgē, started when they were about seven years old and continued to age 29. Boys and girls were trained separately.

Young Spartans did not live with their families but in large living quarters with others the same age. It might have been fun to live among lots of other children, although being away from home at such a young age could also have been pretty scary.

Read more: Curious Kids: Do most volcanologists die from getting too close to volcanoes?

Why were the Spartans so obsessed with fighting?

One important reason for this obsession with fighting was the constant possibility they would need these skills at home, in Sparta itself. 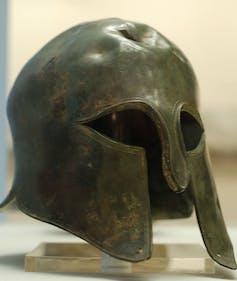 A Spartan helmet at the British Museum. Flickr/john antoni, CC BY

Sparta had once conquered and captured an entire group of people living nearby. These “helots” (as they were called) were put to work, farming so the Spartans could focus on military training. The helots also helped the Spartans in wars against other peoples.

But the helots were unhappy at having lost their freedom and there were many more helots than Spartans. That meant they could possibly rise up and fight back against the Spartans who had captured them. The Spartans prevented this ever-present threat by being constantly on the alert and ready for war.

The Spartans fought many important wars and battles. They took up weapons alongside the Athenians against the Persian king Xerxes in the Persian Wars (490-449 BCE, which means about 2,500 years ago). 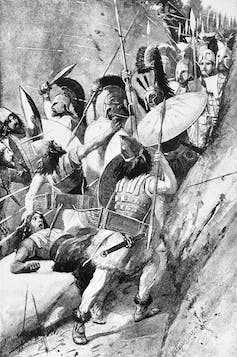 An artist’s impression of the Battle of Thermopylae. Wikimedia

In a famous battle at Thermopylae, a group of 300 Spartans led by King Leonidas heroically defended a narrow mountain pass even though they were much fewer in number than the enemy.

All the Spartans died, including King Leonidas. In the end, however, the remaining Spartans won the war together with the Athenians and other Greeks.

The ancient historian Herodotus, who wrote about this war, tells us that a stone was set up at Thermopylae to remind everybody passing by of the bravery and loyalty of those Spartans who had died there. On the stone was written:

Go tell the Spartans you who read:

We took their orders and lie here dead.

Later, in the Peloponnesian War (431-404 BCE), the Spartans no longer fought alongside the Athenians and their allies but against them. You won’t be surprised to learn that Sparta won.

Yet the Athenian historian Thucydides did not foresee this outcome when he started keeping a record of that war, even as he himself fought in it. Given that the Spartans were so famous for their military, perhaps he might have known better.

Ancient Sparta with its unique way of life is long gone. But today there is still a town called Sparta in Greece in the very same spot as the ancient city.

So, in a way, Spartans still exist, although these days they tend to be a little less strict and certainly not as good at fighting with spears and shields as the ancients.

Read more: Curious Kids: Why does English have so many different spelling rules?

Hello, curious kids! Have you got a question you’d like an expert to answer? Ask an adult to send your question to us. You can:

CC BY-ND Please tell us your name, age and which city you live in. You can send an audio recording of your question too, if you want. Send as many questions as you like! We won’t be able to answer every question but we will do our best.

Memories overboard! What the law says about claiming compensation for a holiday gone wrong

FRANCK ROBICHON/EPAWhen booking a luxury cruise, you generally expect relaxation and enjoyment, not forced quarantine and distress. Unfortunately, for the thousands of vacationers trapped on cruise ships in Asia the...

Without more detail, it's premature to say voluntary assisted dying laws in Victoria are 'working well'

ShutterstockThe Voluntary Assisted Dying Review Board has this week published a report detailing the first six months of the legislation in action in Victoria.The report reveals 52 people legally ended...

who would win in a fight between the Black Mamba and the Inland Taipan?

Wes Mountain/The Conversation, CC BY-NDThis is an article from I’ve Always Wondered, a series where readers send in questions they’d like an expert to answer. Send your question to alwayswondered@theconversation.edu.auWho...

Australia, we need to talk about who governs our city-states

Benny Marty/ShutterstockIn 1971, a Time magazine article, titled “Should New York City Be the 51st State?”, observed:States have not only short-changed and hamstrung their cities but are themselves the least...

originalAnthony Albanese will commit a Labor government to adopting a target of zero net emissions by 2050, in a speech titled “Leadership in a New Climate” to be delivered on...

Labor is right to talk about well-being, but it depends on where you live

ShutterstockLabor’s treasury spokesman, Jim Chalmers, wants to follow New Zealand’s example and introduce a “wellbeing budget” alongside the traditional budget that stresses economic growth, when Labor is next in office.New...

A sea of oversized hair bows bobs through primary school gates each morning. It might be dismissed as a harmless children’s fad but big bows are back, driven by current...

Brain temperature is difficult to measure. Here's how a new infrared technique can help

Shutterstock/PoparticBrain temperature is implicated in many common conditions including stroke, multiple sclerosis, epilepsy, traumatic brain injury, and headaches.Changes in brain temperature can indicate there is a disease developing, but researchers...

Teen use of cannabis has dropped in New Zealand, but legalisation could make access easier

ShutterstockAs New Zealand prepares for a referendum on legalising recreational cannabis, the latest surveys show opposite trends for cannabis use by adults and adolescents. Adult use of cannabis has risen...

Seen as a political narrative, the Morrison government’s handling of the coronavirus (COVID-19) fits the patterns of its approaches on border security and anti-terrorism.Stressing the central imperative is to “keep...

Phil Honeywood on the coronavirus challenge for universities

The coronavirus is presenting a major threat to Australia’s education export industry, which is highly dependant upon the China market, and a huge challenge to the universities. Phil Honeywood, CEO...

Yes, Australians on board the Diamond Princess need to go into quarantine again. It's time to reset the clock

Today’s evacuation of about 180 passengers from the cruise ship Diamond Princess to serve another period of quarantine back in Australia has raised questions about the best way to control...