Last week, federal health minister Greg Hunt announced that more than 60,000 Australians will be asked about their mental health and well-being as part of the Intergenerational Health and Mental Health Study.

The mental health survey will be run in 2020, with new data on how common mental illness is due the year after. This is a welcome announcement for the mental health sector, because information gathered in a survey like this can be used to shape policy reform.

Read more: If we're to have another inquiry into mental health, it should look at why the others have been ignored

But eating disorders, a major category of mental illnesses, have been neglected by all previous important data collection initiatives in Australia so far. Notably, they were missing from the last national mental health surveys in 1997 and 2007.

Eating disorders are not yet an official part of this new survey, but we understand they are being considered.

If people with eating disorders are not counted, they don’t count. In other words, we need to know who has these severe and debilitating conditions, and then work towards improving the treatment and supports available for them.

Read more: FactCheck Q&A: do eating disorders have the highest mortality rate of all mental illnesses?

National surveys ask the public if they have experienced symptoms of various mental illnesses, either in their lifetime or during the past 12 months.

People who answer “yes” to particular clusters of symptoms are “diagnosed”, or assumed to have had the illness.

Asking the public about their symptoms is the best way to understand how common mental illnesses are. This is because most people with a mental illness don’t seek treatment and may never have had a diagnosis. So collecting data from health services or based on reported diagnoses doesn’t provide a full picture.

Also, for some mental illnesses, such as anorexia nervosa or psychosis, people might not realise they have a diagnosable illness. But they are likely to respond “yes” to direct questions about their experiences with body dissatisfaction or thinking difficulties.

A person with anorexia nervosa engages in dangerous behaviours to maintain a very low body weight, or to lose more weight. Although most people have heard of it, anorexia is not common. We know this from other countries who have previously studied the prevalence of anorexia in community surveys.

That being said, it’s very serious and can be fatal. It has the highest mortality of all non-substance use mental disorders, and one in five of those deaths is by suicide.

Read more: Disease evolution: the origins of anorexia and how it's shaped by culture and time

People with bulimia nervosa or binge-eating disorder experience cycles of binge-eating, often after periods of restricting foods, which cause shame, guilt and discomfort. 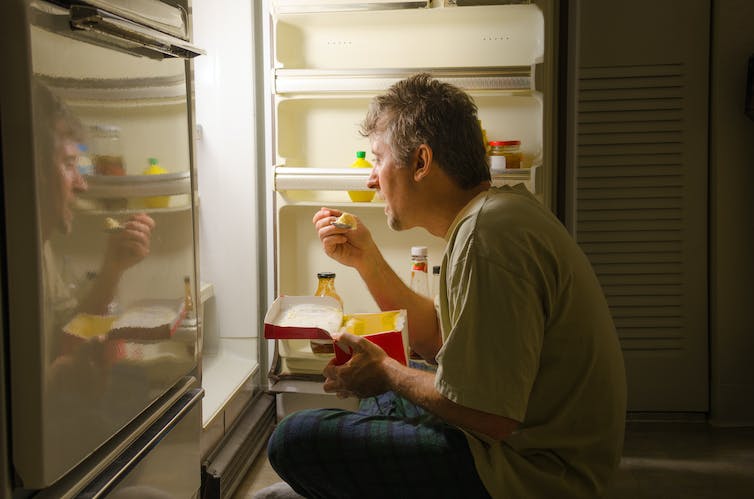 One example of OSFED is atypical anorexia nervosa – when someone shows all the symptoms of anorexia and has lost a significant amount of weight but their BMI is in the “normal” or “high” range.

People with eating disorders often have a negative body image, and a strong perception their self-worth is tied to their appearance or body weight.

Every year in Australia, millions of years of healthy life are lost because of injury, illness or premature deaths in the population. This is known as “burden of disease”.

Like national surveys, burden of disease studies are extremely important for planning and funding health services. They use prevalence statistics, or how many people per 100,000 Australians are assumed to have a particular illness. Given we don’t have good data on how prevalent eating disorders are, we likely underestimate their burden of disease.

The recently released Australian Burden of Disease Study 2015 lists eating disorders among the most burdensome illnesses for Australian females, being the tenth leading cause of total burden of disease for females aged 5-14 and women aged 25-44.

Eating disorders are on the rise

Despite our lack of prevalence data, there is evidence showing eating disorders are an increasing problem and should be regarded as a national priority.

Consecutive population surveys in South Australia showed the numbers of people with eating disorders climbed over a ten-year period.

Annual youth surveys demonstrate body image, the most potent risk factor for eating disorders, is year after year among the top concerns for young people.

A recent study on adolescents in the Hunter Valley region of NSW found one in five had experienced an eating disorder.

People with eating disorders use more health services than people with all other forms of mental illness, but often don’t receive appropriate and effective treatment. They typically receive treatment for weight loss, depression or anxiety, but are rarely treated for their disordered eating.

Eating disorders were estimated to cost the health system A$99.9 million in the year 2012 alone.

Better treatment and prevention of eating disorders would reduce the cost and the burden of disease. But we need the data to show where the treatment gaps are and how to fund better services.

There are many promising elements of the proposed Intergenerational Health and Mental Health Study. These include surveying multiple people in a family, gathering physical and mental health data, and a target of more than 60,000 Australians. But it’s time eating disorders were included.

Why Australians fell out of love with Holdens

ShutterstockAs a parent, I find it so frustrating to take my children shopping, reusable bags in hand, only to be offered plastic toys at the checkout. It’s an incredibly confusing...

Nearly 80% of Australians affected in some way by the bushfires, new survey shows

James Gourley/AAPLast month, the Australian National University contracted with the Social Research Centre (SRC) to survey more than 3,000 Australian adults about their experiences and attitudes related to the bushfires...

ShutterstockWarning: this piece features frequent coarse language that may offend some readers.S...

AAP/Lukas CochIn his Closing the Gap speech to parliament last week, the prime minister injected some order and transparency back into the constitutional recognition process.The PM anchored his government’s work...

ShutterstockHeavily subsidised aged care services used to be seen as a right and entitlement for all older Australians. But as aged care demand grows and costs rise, it’s becoming increasingly...

Victoria’s government finds itself in a big hole with its West Gate Tunnel project. As diggers lie idle in a dispute over what to do with contaminated soil, it’s facing...

Rain has eased the dry, but more is needed to break the drought

After the intensely dry conditions of 2019, January and February have brought much-needed rain. Dams in many cities and towns were replenished and some farmers may be able to grow...

Richard Wainright/AAP ImageWhen people think about Australian Rules Football injuries, they tend to think about head injuries and the long-term effects of concussion. Or they might think of the potentially...

If you’re a traveller who cares about reducing your carbon footprint, are some airlines better to fly with than others?Several of the world’s major airlines have announced plans to become...