A quarter of children have dental decay by the time they start school. This occurs when bacteria in the mouth break down sugar to produce acid, which attacks and dissolves the teeth.

Avoiding sugary food and drinks and brushing regularly with an age-appropriate fluoridated toothpaste remain the best ways to ensure children have healthy teeth. But despite parents’ best efforts, some children’s teeth are inherently weak and decay more easily.

Historically this was thought only to affect a very small minority (0.1%) of people who had rare genetic conditions such as amelogenesis imperfecta (enamel malformation).

But more recent Australian studies have reported that up to 14% of pre-schoolers may have “hypomineralised second primary molars” (HSPM), where the enamel (outer layer) of the second baby molars doesn’t develop properly, making them weak and prone to damage. 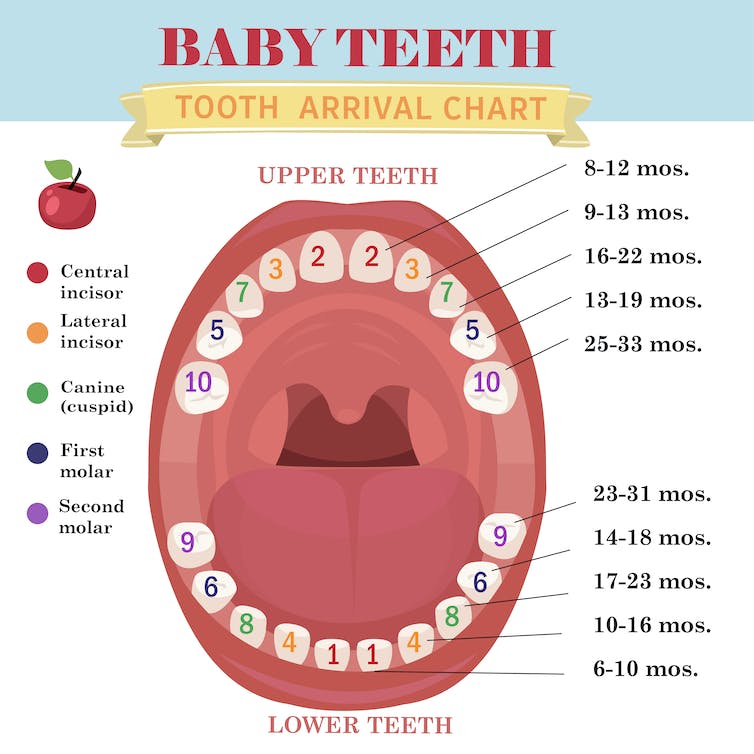 The second primary molars (marked in purple) are the back ‘baby’ or ‘milk’ teeth. Shutterstock

What it means for kids

The teeth of children with hypomineralised second primary molars may have white or yellow patches with rough areas where the weak enamel has broken off.

The teeth can be so weak that they’re unable to cope with the demands of chewing and break down soon after they come through the gums.

These teeth are often highly sensitive and children may avoid brushing them because they hurt. Such sensitivity, combined with the weak enamel, means dental decay occurs more readily.

Read more: How to (gently) get your child to brush their teeth

Providing dental care for children with these teeth is challenging, as the usual anaesthetic agents to numb teeth are less effective, and teeth often hurt during treatment.

The usual filling materials, which work by sticking to the enamel, don’t last as long because of the poor enamel quality, so these children need to have dental treatment more often.

All of this has been shown to lead to higher rates of dental anxiety and phobia.

The bad news doesn’t end there. If the baby teeth are affected, the adult teeth are also more likely to be affected.

Tooth enamel is formed long before the teeth come through the gums. The baby molars start to form halfway through pregnancy, and are essentially completely formed by birth.

Unlike skin and bone, tooth enamel can’t naturally heal, so any damage would still be present when the second primary molars erupt, at around two years of age.

Despite the recommendation for children to have a dental checkup by the age of two, only one in three children has seen a dentist by age four. Defective teeth are sometimes not noticed until they break down and become infected. In such cases, they may need to be removed.

Read more: Child tooth decay is on the rise, but few are brushing their teeth enough or seeing the dentist

A recent study of twin children found that the causes may not be genetic, but rather due to something that happens during pregnancy or birth. Hypomineralisation of second primary molars has been linked to maternal illness, smoking and alcohol use in pregnancy, and research is ongoing to clarify these links.

Conditions that weaken enamel mean that while a healthy diet and good brushing help, additional precautions are needed.

Dentists can help detect signs of weak teeth before they break down. They can help protect these teeth using seals or fillings that cover weak parts.

In badly affected teeth, this window of time is narrow, so it’s important to have regular dental visits, starting as early as 12 months of age, or when the teeth first come through.

Read more: Bad teeth? Here's when you can and can't blame your parents

Olga Kashubin/ShutterstockThe good news in the Reserve Bank’s latest quarterly set of forecasts is that the recession won’t be as steep as it thought last time.The bad news is it now expects ultra-weak economic growth to drag on and on, pushing out the recovery and meaning Australia won&... 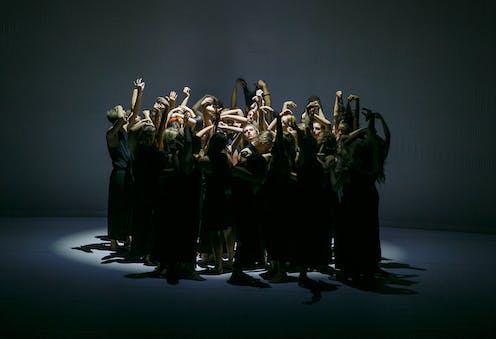 Stephanie Lake's dancework Colossus.Yaya StemplerNational crises, like the pandemics that can provoke them, come in stages. Each stage presents leaders with unique problems that require mental, moral and emotional agility to manage. Change is the only constant, as policies that work one moment fail ...

ShutterstockDuring the COVID-19 pandemic we’re constantly being reminded to practise good hygiene by frequently washing our hands and regularly cleaning the spaces where we live and work.These practices aim to remove or kill the coronavirus that causes COVID-19, and thereby minimise our risk o... 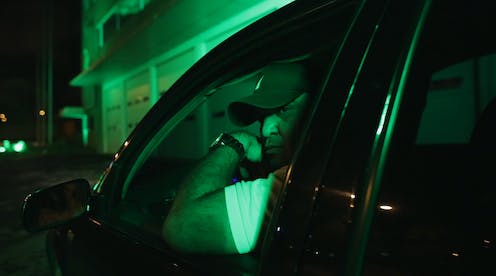 MIFFReview: The Meddler, screening at the Melbourne International Film FestivalFor movie scholars and enthusiasts, one of the worst things about the COVID-19 pandemic has been the shutting down of cinemas. It’s a fundamentally different experience watching a film on a small screen with friends...