Bushfires are a threat to most animal species. But for one rare lizard living on a rocky island in the sky, a single blaze could wipe the species off the planet.

The Kaputar rock skink (Egernia roomi) is thought to have have one of the smallest ranges of any reptile in New South Wales – at the summit of a single extinct volcano, Mount Kaputar.

The existence of this mysterious skink was informally known for decades, and in August last year the species was finally scientifically described. But months later, it may already be headed for extinction.

Late last year, bushfires are thought to have ripped through more than half the Kaputar rock skink’s habitat. We don’t yet know what this means for its survival, but the outlook is not good.

The fire in Kaputar National Park that tore through the skink’s habitat. Narrabri Rural Fire Brigade

The Kaputar rock skink is handsome lizard, typically around 10 centimetres in body length, with dark chocolate brown and grey scales and an orange belly.

It’s found in the Nandewar Ranges near Narrabri. The ranges – weathered remnants of ancient volcanic eruptions between 21 and 17 million years ago – rise out of the surrounding plains in a series of breathtaking rock formations.

The Kaputar rock skink lives on one of these outcrops, Mount Kaputar. It exists on a narrow band of rock at the summit, more than 1,300 metres above sea level.

This high elevation areas is cooler than the surrounding plains, which suits this cool-adapted species perfectly. But the species’ tiny range means it’s highly vulnerable. When danger strikes, the Kaputar rock skink has nowhere to go. 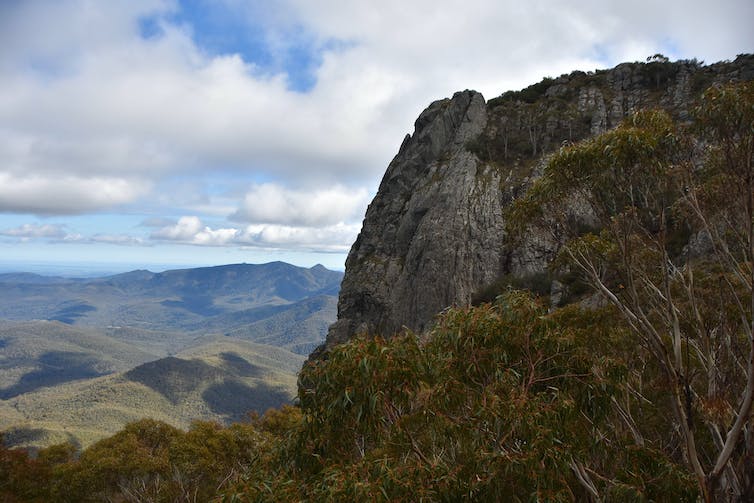 When the fires hit

Bushfires tore through the Nandewar Ranges in October and November last year, reportedly burning more than 17,000 hectares of bush. More than half of Kaputar rock skink habitat is believed to have burned.

The expert panel advising the federal government on bushfire recovery has named the skink as one of 119 severely-affected species needing urgent conservation intervention. But the species’ rugged, remote habitat, combined with COVID-19 restrictions, have delayed efforts to assess the extent of the damage.

Read more: After the bushfires, we helped choose the animals and plants in most need. Here's how we did it

It’s likely that many Kaputar rock skinks died during the fires themselves, although we hope others survived by crawling deep into rock cracks.

But after the fires, threats remain. Vegetation loss may make the skinks easy prey, and in a charred landscape, there may be little for the reptiles to eat.

History tells us fires do affect high-elevation skinks. For example, fire is thought to have driven the rock-dwelling Guthega skink (Liopholis guthega) to become locally extinct at some sites on the Bogong High Plains in northeast Victoria.

A mountain of threats

Species restricted to a small area are vulnerable to any loss of habitat. And fire is not the only threat to the Kaputar rock skink.

Climate change is a big concern. While many species respond to increasing temperatures by migrating uphill to cooler climes, that’s not possible for the skink, which is already precariously perched on a summit.

Read more: Sure, save furry animals after the bushfires – but our river creatures are suffering too

Introduced goats may also be taking a toll as they trample through the rocky terrain.

Evidence suggests humans are also a disturbance to the Kaputar rock skink’s habitat. The reptiles live close to the edge of cliff lines that are readily accessible by walking tracks. Trampling of low vegetation has been observed at many sites, as have disturbed rocks – the latter possibly from people wanting to find and photograph the species. 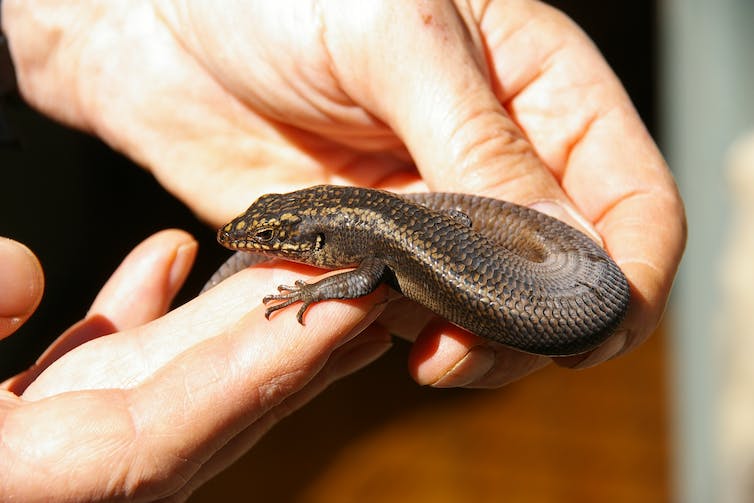 Scientists know relatively little about the Kaputar rock skink. One thing we’re sure of, though, is that the species’ existence is threatened.

Surveys are needed at known skink locations, as well as surrounding areas where it might lie undiscovered. Understanding where the species occurs and how it responds to fires, drought and other disturbances is critical to conservation efforts.

Read more: Our field cameras melted in the bushfires. When we opened them, the results were startling

Of course it’s the middle of winter now, so the skinks may not be very active on their cold mountain top. But my colleagues and I hope to travel to Mount Kaputar soon to survey the skink’s habitat and find out how the species fared.

Dane Trembath, an Australian Museum biologist with a focus on reptiles, contributed to this article.