From Tasmania’s majestic forest giants to the eucalypt on your nature strip, trees in Australia are many, varied and sometimes huge. But how many are there exactly? And how does their number change over time?

To answer such questions, we mapped changes in Australia’s tree cover in detail, using 30 years of satellite images. We published the results in a recent paper and made the data available for everyone in our new TreeChange web interactive.

In total, we found there is currently the equivalent of 1,000 standard trees for every Australian. But this doesn’t mean all our forests are doing well.

There are 24 billion standard trees in Australia

Counting trees is difficult, as there are always more small trees than big ones. So we defined a “standard”: imagine a gum tree with a trunk 30 centimetres in diameter, standing about 15 metres tall.

It’s the sort of good-sized tree you might find in your street or backyard — not huge, but not small either. It might have been planted 15 or 20 years ago. Cut it down and let it dry out, and it will weigh about half a ton.

Read more: Photos from the field: capturing the grandeur and heartbreak of Tasmania's giant trees

To count the number of trees in Australia, we first estimated the total mass of trees by combining satellite and field measurements. Then we compared this result to the weight of a standard tree.

We found the total forest biomass across Australia holds the equivalent of about 24 billion standard trees. 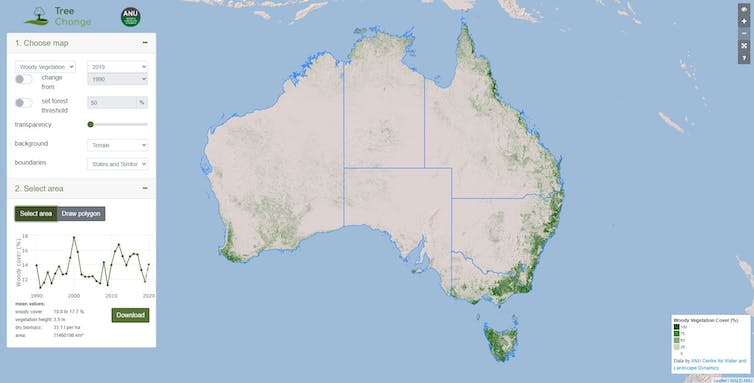 If you want to know how forests and woodlands are faring in your state, council or on any property, you can use our TreeChange interactive.

What this means for forests and carbon emissions

If the total mass and number of trees has increased in Australia, does this mean the area of forests has expanded, too? To determine that, you need to decide how many trees make a forest.

Typically, to be called a forest in Australia, a canopy of trees over two meters tall needs to shade 20% of the ground. If only 10-20% of the ground is shaded, we call it a woodland instead.

So where did they come from, and why wasn’t it reported in the news? Probably because most of the trees were already there. They just grew larger and denser, and crossed the threshold of our definition of a forest, so were counted in. 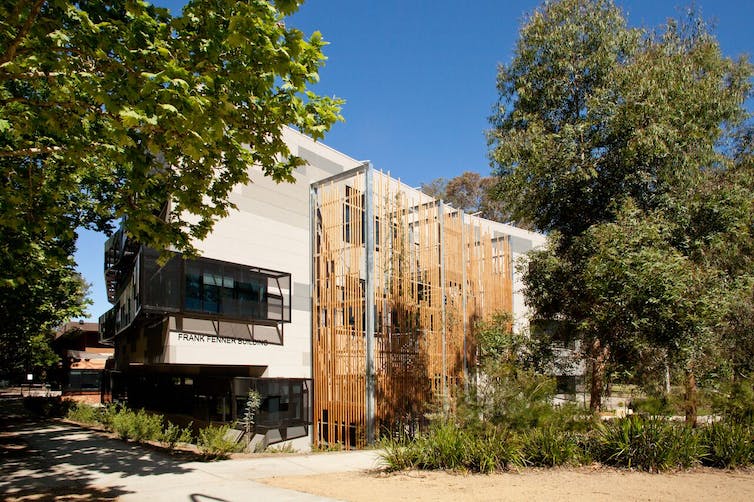 Examples of standard trees, pictured outside my office.

And are eight new trees each year, per person, enough to soak up our greenhouse gas emissions? No.

By international standards our emissions are massive, equivalent to the carbon stored in 24 standard trees per person per year. Even so, those eight new trees do us a big favour.

And additional carbon is stored on the forest floor in, for example, logs and branches, as well as under the surface as organic matter. This is worth, perhaps, several more trees of carbon. But it is not clear how safe those carbon deposits are from fire and drought.

Still, if you wanted to set yourself a new year’s resolution, planting those additional 16 trees would be a great start.

The increasing trend in forest extent has not been smooth — there have been big swings corresponding to wet and dry periods.

For example, the climate of northern Australia has become wetter over the last 30 years, which has helped tree growth. Changes in fire regime and the fertilising effect of our carbon dioxide emissions into the atmosphere may also have played a role.

And just like increased rainfall can help increase the area of forests, drought and bushfire can cause them to disappear. 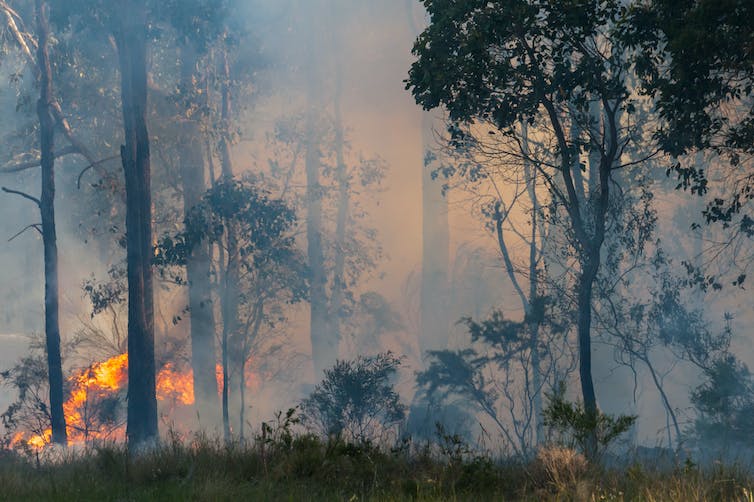 Bushfires can thin vegetation so it falls short of the definition of a forest. Shutterstock

Bushfires may not remove or even kill most trees, but they can cause enough dieback, scorching or thinning for the vegetation to fall short of the definition of a forest or woodland.

Read more: Many of our plants and animals have adapted to fires, but now the fires are changing

Logging can also cause a patchwork of gains and losses when it goes through cycles of harvesting, regrowth and replanting. And land clearing of native forests still occurs in Australia, such as in the old growth forests of Tasmania, which are vital for native wildlife.

It’s not all good news

While we found the total area and biomass of forests and woodlands has been rising, quality can be more important than quantity when it comes to our ecosystems.

Many things are required to make up a high quality forest, such as a rich understory of perennial species, including grasses and shrubs, and even logs and branches on the ground. These features provide important habitats for many native animals.

Read more: Comic explainer: forest giants house thousands of animals (so why do we keep cutting them down?)

Large old trees are also important. Some trees take hundreds of years to reach their greatest size, towering up to 100 meters tall.

These forest giants are an ecosystem in themselves, with birds and tree-dwelling mammals, such as sugargliders, relying on their nooks and crannies. Old growth forests also hold far more carbon than a new forest. 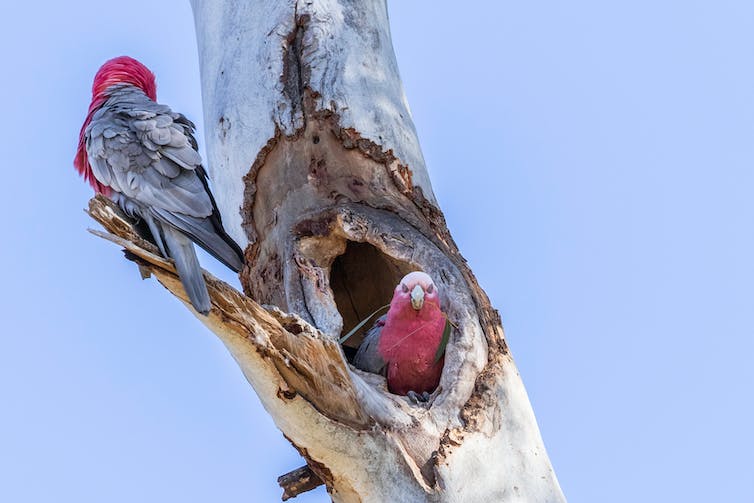 Many native birds rely on the nooks and crannies of old growth trees. Shutterstock

In some cases, a few remaining forests and woodlands are all that’s left of an endangered ecosystem, such as once-abundant box gum grassy woodlands.

Such old or rare forests are difficult or impossible to replace once lost. So creating new forests should never be seen as an alternative for protecting our existing ones.

Read more: Where the old things are: Australia's most ancient trees