Heatwaves, floods, bushfires: disaster season is upon us again. We can’t prevent hazards or climate change-related extreme weather events but we can prepare for them — not just as individuals but as a community.

One way to do that is develop what is known as a resilience action plan, or RAP.

A RAP is a way for communities (be they school-based, profession-based, or neighbourhood-based) to collectively assess their strengths and weaknesses ahead of coming disasters, identify priorities and build an implementation strategy.

Recent work with Tarnagulla — a small town that sits in a bushfire and heatwave-prone part of rural Victoria — offers an example. The community got together, applied for funding and co-produced with me (Mittul Vahanvati) a tailor-made RAP for their town.

Read more: Rebuilding from the ashes of disaster: this is what Australia can learn from India

Tarnagulla is about 180 kilometres north west of Melbourne, and 40 kilometres west of Bendigo. Its population and economic prospects boomed during the 1850s goldrush, but by the 2016 Census, its population had dwindled to just 133 people with a median age of 61. 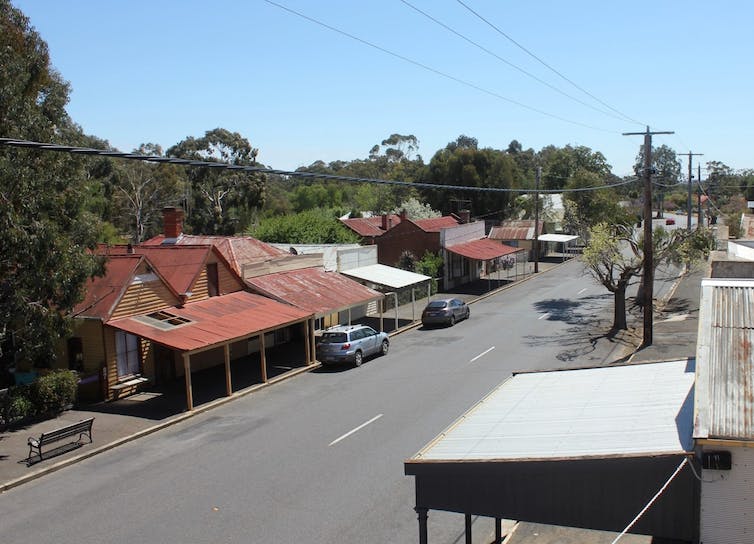 The town relies on agriculture and animal husbandry, but faces myriad challenges, including:

The town is at risk of disappearing. Its people face real danger when fire, heatwaves or other natural hazards strike and there’s precious little disposable income to spend on future-proofing homes.

The trajectory for Tarnagulla is not unusual in Victoria. Determined to save it from being engulfed by climate-change related disasters, the community applied for and got a grant from the Victorian Department of Environment, Land, Water and Planning, through their Virtual Centre for Climate Change Innovation.

They used part of the money to engage one of the authors (Mittul Vahanvati), to co-produce a RAP for and by Tarnagulla community. 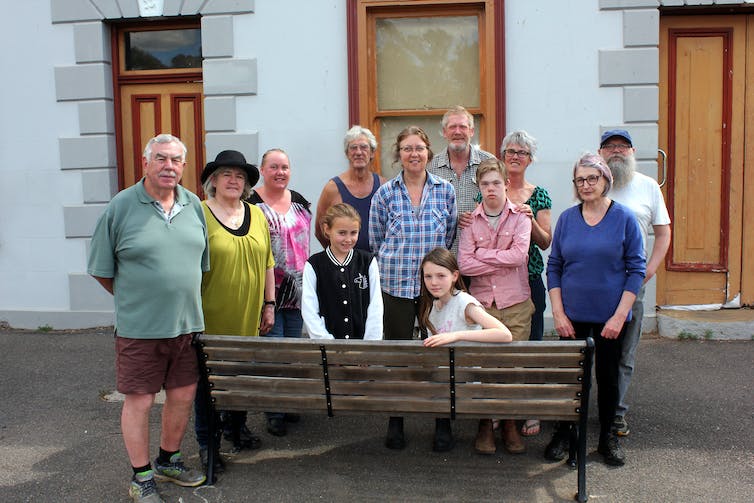 Determined to save the town from being engulfed by climate-change related disaster, Tarnagulla applied for and got a grant from the Victorian Department of Environment, Land, Water and Planning to build a RAP. Linda Jungwirth, Author provided

We held eight workshops over two years in Tarnagulla, with project leaders from the local community meeting me (Mittul Vahanvati) monthly. Establishing mutual trust and a sense of collaborative design was crucial; the process doesn’t work when an outsider parachutes in and starts telling locals what to do.

We identified the town’s existing strengths (outlined below). 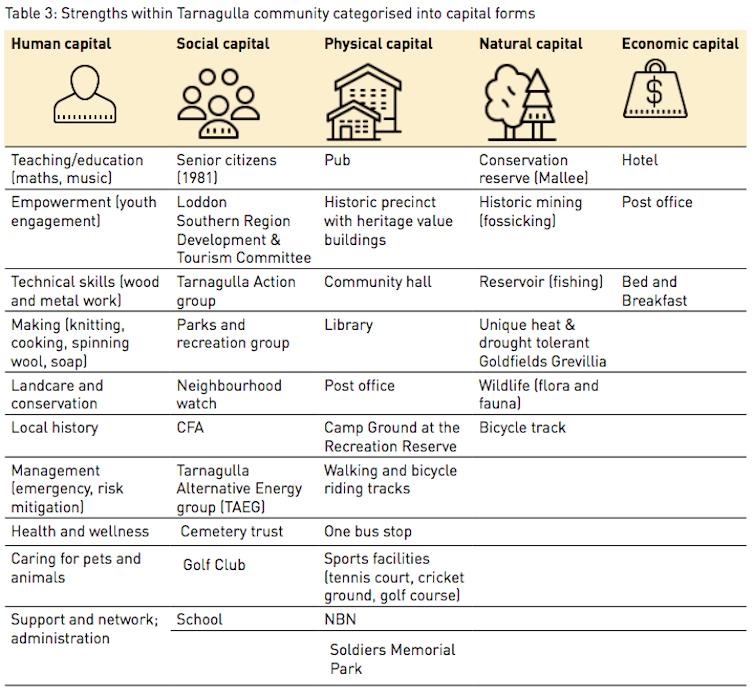 We also talked about how climate change-related disasters — such as increasingly frequent and harsher heatwaves, bushfires and droughts — were causing problems locally such as 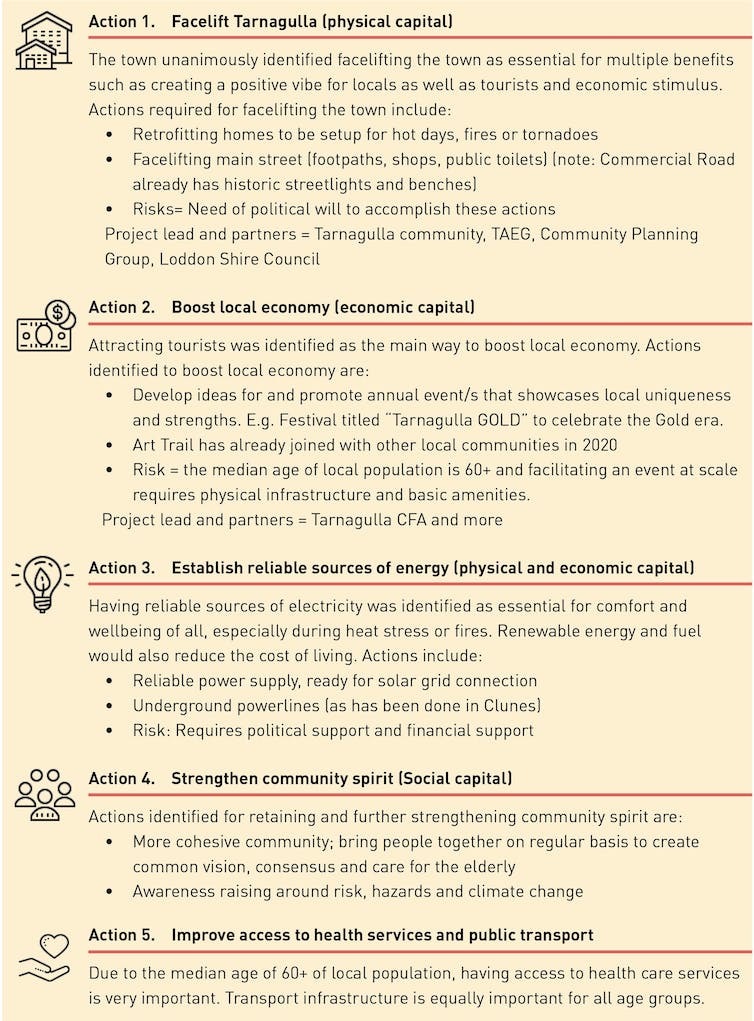 Local councillors, and representatives from the emergency management sector and the health sector got together to test out the RAP, its feasibility and whether it would help reduce loss and devastation of town during hazards.

It became clear a complete emergency evacuation plan would require the town having a safer shelter, improving key roads used to flee the town and ensuring comprehensive communication systems to help vulnerable people (such as older people, children or single people) during a disaster.

The town also identified the need for a change in mindset about risk, and better communication via social media. The local Landcare group also resolved to raise awareness abut conserving and developing drought-tolerant species.

What were some of the concrete outcomes?

The resulting resilience action plan was endorsed by the Tarnagulla community and launched in September 2020. Now, the town is working towards implementing it.

Thanks to the RAP, Tarnagulla was selected for a feasibility study looking at using a microgrid to deliver reliable and affordable energy, and assess whether the town would survive network faults due to extreme weather.

Many households invested or are investing in generators, solar panels, battery bank and ways to cool their house ahead of coming heatwaves, due to awareness gained during workshops. 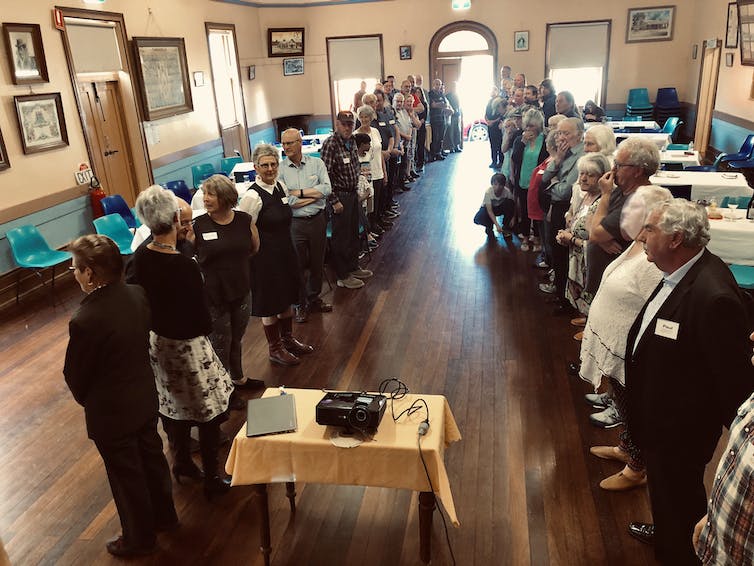 The resilience action plan was endorsed by the Tarnagulla community in September 2020. Mittul Vahanvati, Author provided

Another win, separate but complimentary to the RAP is the Tarnagulla Primary School hall being retrofitted to serve as a community heatwave and bushfire safe shelter. The school has provided out-of-hours school access for members of the local community who have nowhere else to shelter when fires or heatwaves strike.

The school community also raised funds to install a 12.6kW solar system, with a goal of making the school energy independent during power outages or heatwaves. 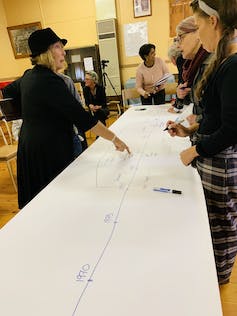 The town has a clear, community endorsed plan for what’s needed for the future. Sitong Wei, Author provided

The process of RAP also built confidence and skills in community members, some of whom have since been elected in the local council or part of the planning committees. There, they are in a much stronger position to push for urgent capital works to improve footpaths, public toilets and shops and support retrofitting of homes.

There is still plenty to be done, much of it needing extra funding (and as is the case everywhere, COVID has hindered progress). But now the town has a clear, community-endorsed plan to protect lives and properties and enable citizens to transition towards a resilient future.

Much of the discourse around emergency preparedness focuses on individual preparedness, which puts the financial and physical burden on each person to “be ready” when disaster strikes. In reality, collective action is required.

As one participant told us,

We have realised that we are not alone in facing the present and anticipated challenges. There are new opportunities on the horizon to work together with other communities and projects.

If we want to prepare for uncertain futures, each one of us should consider building a RAP with our community.

Read more: 'Nobody checked on us': what people with disability told us about their experiences of disasters and emergencies

This article was co-authored by Leigh Mellberg (Principal, Tarnagulla Primary School) and George Filev (Country Fire Authority). It’s part of a series The Conversation is running on the nexus between disaster, disadvantage and resilience. You can read the rest of the stories here.