Let’s turn back the hands of time. Before extinction knocked dinosaurs off their pillar, before the “Great Dying” extinction wiped out 95% of all organisms – we had the Paleozoic Era.

During this age in Earth’s history, between 541 million and 252 million years ago, arthropods (animals with exoskeletons such as insects, crustaceans, scorpions, and horseshoe crabs) were exploring the extremes of size, from tiny to huge.

In fact, some Paleozoic arthropods represent the largest animals on Earth at the time. If you were to take a swim in the Paleozoic oceans, you may have been fortunate (or unfortunate) enough to find one of the most fearsome of these extinct arthropods: the sea scorpions, Eurypterida.

Our new research, published in Gondwana Research, is the most comprehensive collection of information on these fascinating creatures that once roamed Australian waters. 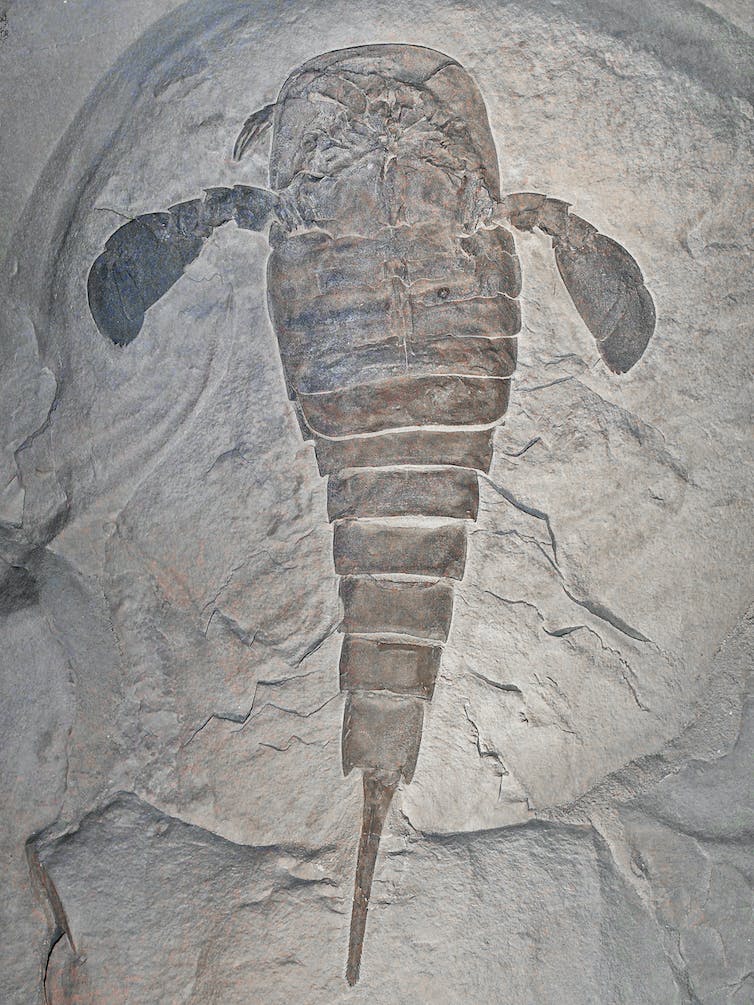 A Eurypterus remipes fossil. This sea scorpion existed more than 400 million years ago and was usually less than one foot in length, but relatives are believed to have reached up to eight feet. H. Zell/Wiki commons, CC BY-SA

A sight to behold

Although Eurypterida looked broadly like scorpions (with a similar body shape, albeit built for swimming), they were not. They were more like the cousins of modern scorpions.

An exceptional part of the sea scorpion evolutionary story is how they fit into the narrative of Paleozoic gigantism.

Sea scorpions include the largest marine predators to have ever arisen in the fossil record, including one species thought to have been more than 2.5 metres long, Jaekelopterus rhenaniae. Back then, some of these giants were effectively in the same place in their food web as the modern great white shark.

These likely agile swimmers would have used their large front limbs, armed with claws, to grab their prey, which they would then crush between the teeth-like structures on their legs (called gnathobasic spines).

While we’re not sure exactly what these large animals ate, it’s likely fish and smaller arthropods would have been on the menu. And if humans had been around swimming in the sea, maybe us too!

The size of the largest extinct sea scorpions, relative to a human. Slate Weasel/Wiki commons. Modified.

A fascinating (but murky) history

Australia is famous for its array of curious animals, including unique modern species such as the platypus. And this uniqueness extends far into the fossil record, with sea scorpions being a case in point.

But the scientific record and study of Australian sea scorpions has been patchy. The first documented specimen, published in 1899, consisted of a fragmented exoskeleton section found in Melbourne.

Prior to our new research examining the completeness of the group in Australia, there were about ten records – and only one other attempt to pool everything together. As such, the diversity and spread of these fossils was fairly uncertain.

For us, revisiting these amazing fossils resulted in a few trips to different Australian museums. We also had specimens sent to us at the University of New England to examine in person.

Read more: The mighty dinosaurs were bugged by other critters

This journey of palaeontological discovery uncovered many sea scorpion fossils than hadn’t previously been noted. As a result, we now have evidence of a possible six different groups that existed in Australia.

Collating these specimens together in our most recent publication, we illustrate the Pterygotidae (the family of sea scorpions that reached 2.5 metres long) dominated the group’s Australian fossil record. Although this had been noted before, the abundance of material from different locations and time periods, especially from Victoria, was unexpected.

Back to the source

Besides showcasing the largest number of Australian sea scorpions, our paper also outlines the overall lack of information on these animals.

Despite there being much fragmented material, there is only one (mostly) complete specimen, Adelophthalmus waterstoni, measuring just 5.7cm long.

Future research will involve revisiting the sites where these specimens were originally collected, in the hope of finding more complete specimens. Not only will this help document Australian sea scorpion species better, it will also allow for a more complete understanding of the environments in which they lived.

Ultimately, one thing is clear – there is much left to uncover about these titans that swam through Australia’s prehistoric oceans.

The authors thank Natalie Schroeder of the Commonwealth Palaeontology Collection for her help with this project.

Evan Vucci/APIn an age of hyperpartisan politics, the Biden presidency offers a welcome centrism that might help bridge the divides.But it is also Biden’s economic centrism that offers a chance...

Why are Japan's leaders clinging to their Olympic hopes? Their political fortunes depend on it

Ichiro Ohata/APWith the spread of COVID-19 steadily worsening in Japan since the onset of winter — daily records for infections and deaths continue to be broken — the fate of...

from www.shutterstock.comAll eyes are on COVID-19 vaccines, with Australia’s first expected to be approved for use shortly.But their development in record time, without compromising on safety, wouldn’t have been possible...

The subtle sophistication of Bluey's soundtrack helped propel it to stardom

ABC/IMDBBluey is easily the most successful Australian television show of the last decade. A record-breaking success for its local broadcaster the ABC, as well as production partners BBC Studios and...

ShutterstockAustralia is in the midst of tropical cyclone season. As we write, a cyclone is forming off Western Australia’s Pilbara coast, and earlier in the week Queenslanders were bracing for...

how to help your teen get enough sleep

ShutterstockWhen the holidays end, barring a fresh outbreak of COVID-19, teenagers across Australia will head back to school. Some will bounce out of bed well before the alarm goes off...

How will COVID-19 vaccines be approved for use in Australia?

Some Australians could be receiving a COVID-19 vaccine within weeks. Amid the continued spread of the virus and emergence of highly contagious variants, the federal government has accelerated the start...

5 ways to improve the government's plan to protect threatened wildlife

Numbats are among 20 mammals on the federal government's priority list. ShutterstockAustralia’s Threatened Species Strategy — a five-year plan for protecting our imperilled species and ecosystems — fizzled to an...

Yes, baby teeth fall out. But they're still important — here's how to help your kids look after them

ShutterstockBaby teeth, or milk teeth, act like lighthouses to guide the adult ones to their correct destination. A baby tooth will become wobbly and fall out because the adult tooth...

The inventor of the World Wide Web, Tim Berners-Lee, has raised concerns that Australia’s proposed News Media and Digital Platforms Mandatory Bargaining Code could fundamentally break the internet as we...

Abused, neglected, abandoned — did Roald Dahl hate children as much as the witches did?

The Witches (1990)IMDBDescribed as “the world’s greatest storyteller”, Roald Dahl is frequently ranked as the best children’s author of all time by teachers, authors and librarians. However, the new film...