As part of new research into missing persons in Australia, I have been asking people who return after disappearing what they needed or wanted. Mary, who has gone missing four times in the last few years, responded,

I just wanted someone to ask if I was OK when I came back.

Voices like Mary’s are not often heard, nor are their problems understood, when we talk about the mystery and intrigue of missing persons cases.

Nearly all missing persons (97%) return within two weeks, which causes these cases to be seen, by both the public and police, as simple search operations. Viewing missing persons in this way ignores the underlying issues that trigger disappearances, making prevention strategies more difficult to put in place.

As we mark National Missing Persons Week, we must recognise the need for new solutions to address the broader social and emotional factors that cause people to go missing to help stem the tide.

Missing episodes can be triggered by numerous factors: substance abuse, trauma, relationship breakdowns and the need to escape dangerous situations, such as domestic and family violence.

The responsibility for finding missing people usually falls to police and, in some circumstances, emergency search and rescue services. But police are often ill-equipped to handle these cases, especially when it involves searching for people with complex emotional health needs or those at risk of harming themselves. 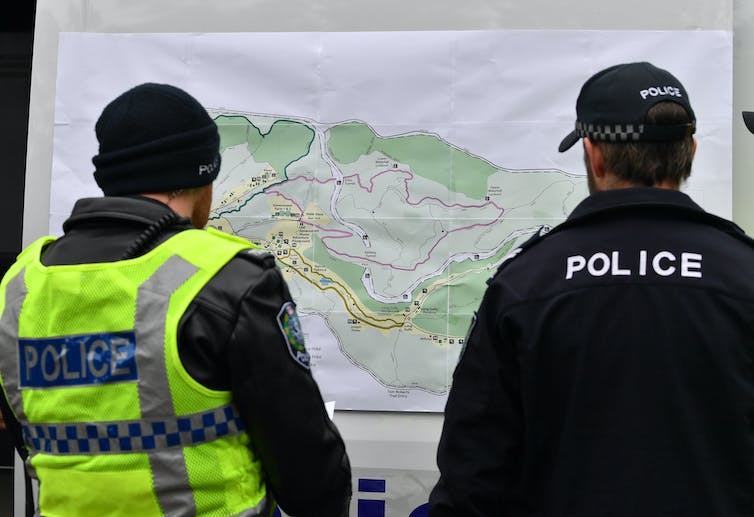 Police are often the front-line responders in missing persons cases, but may be ill-equipped to help those with mental or emotional health issues. David Mariuz/AAP

These cases can also strain police and community resources. In 2000, each missing person was estimated to cost communities A$2,360 on average in search costs, loss of earnings while family members looked, and health and legal costs.

Our limited research in Australia can be enhanced by looking to other countries like Canada, where more funding has been invested in studying vulnerable population groups at risk of going missing.

This could help police more effectively respond to missing persons cases in partnership with health services.

What do returned missing people say?

Sarah Wayland (author of this piece) has been conducting research asking returned missing people to share their stories. In the last month, she has heard from 50 people who have painted a picture of vulnerability and disconnection that isn’t simply resolved when they return or are found.

A majority (80%) of respondents expressed shame on their return, explaining they didn’t want to be seen by family and friends, as well as those who helped search for them, as “attention seeking”.

Some also expressed frustration and anger at the lack of support services after they were found. As one respondent explained,

There’s no village and when you ask for help, no one is truly there to help, even though they say so.

Most respondents said they went missing primarily due to periods of distress or poor mental health, as well as in response to trauma in their families. Many chose not to tell others they were going to disappear.

Half of the respondents returned home on their own volition, while half were located by police.

What researchers have found in Canada

Lorna Ferguson and other Canadian researchers have found the vast majority of missing persons are dealing with mentally or emotionally distressing issues — similar to those in the Australian study.

Indigenous people (primarily women) and those struggling with addictions, mental illness or cognitive disabilities are also at a higher risk for going missing, research shows.

Read more: Missing and murdered Indigenous women inquiry: We must listen and act

Many of these mental and emotional health issues cannot be resolved by simply locating the individual, pointing to the strong need for enhanced strategies involving police and social services working together.

Several Canadian inquiries into missing persons have also noted the lack of international data on the number of people who go missing each year and the affect on police and public health resources. This makes it difficult to develop evidence-based prevention and intervention strategies to address the factors that cause people to disappear.

What can be done differently

We need to view missing persons as a public health issue, rather than taking a whole of community approach. UK research has found that to be effective, awareness campaigns on missing persons must be targeted to doctors, mental health workers and emergency departments so they can recognise the signs that lead people to go missing earlier.

Police and social workers need to work together to provide wraparound care. In both Australia and Canada, there is currently no routine follow-up care offered by health care professionals to missing people when they come back. Instead, police make referrals on a case-by-case basis depending on the health needs of the individual.

We need more effective partnerships between police and social workers, particularly in hot spots where people are more likely to go missing and when they return, to assist people in getting the help they need.

We need to invest more funding in research on the factors that lead to disappearances, for instance, by conducting interviews with people who have returned. This will help us better understand the underlying triggers for disappearances and lead to more effective policies and services for those at risk of going missing.

Every year in Australia, nature grows 8 new trees for you — but that alone won't fix climate change

ShutterstockFrom Tasmania’s majestic forest giants to the eucalypt on your nature strip, trees in Australia are many, varied and sometimes huge. But how many are there exactly? And how does...

The bad bits of ParentsNext just came back

NIKOLAY OSMACHKO/PexelsOn Monday “mutual obligation” was switched back on for programs such as ParentsNext.In the case of ParentsNext that means parents selected for it are required to attend initial and...

ShutterstockYear 12 exams can be stressful at the best of times; this is particularly true for the Class of 2020. Here are five ways parents and carers of Year 12...

God, plagues and pestilence – what history can teach us about living through a pandemic

Anthony Van Dyck's Saint Rosalie Interceding for the Plague-stricken of Palermo/The Conversation (with apologies)Most of us are living through a year that is unprecedented in our lifetimes. Too young to...

it's possible — how we can create a fairer, greener Australia beyond COVID

Joe Castro/AAPWe are living through the greatest disruption of the postwar era; what is likely to be the defining historical period of our lives. And the disrupter is a piece...

Facebook Messenger and Instragram’s direct messaging services will be integrated into one system, Facebook has announced. The merge will allow shared messaging across both platforms, as well as video calls...

how to time a bombshell like Trump's tax returns

It’s unlikely The New York Times’ publication of Donald Trump’s tax records just before the first presidential candidates’ debate was a coincidence.This looks like a classic example of what political...

For three decades, Australia’s economic story has been marked by abundance and wealth. Much of it has flowed from minerals, and a good deal more from earlier economic reforms.COVID-19 has...

Vaccine refusers are health literate and believe they're pro-science. But this just reinforces their view

Australians belonging to the vaccine refusal movement consider themselves a science advocacy group, according to a study published today.My colleagues and I found this group believes it lobbies for unbiased...

Can colonialism be reversed? The UN's Declaration on the Rights of Indigenous Peoples provides some answers

Can a state built upon the “taking of another people’s lands, lives and power” ever really be just?Colonialism can’t be reversed, so at a simple level the answer is no.But...

With the election looming and New Zealand First struggling in the polls, where have those populist votes gone?

New Zealand First leader Winston Peters on the campaign trail in late September.GettyImagesWinston Peters has long been described as a populist, both in New Zealand and internationally. At different times...

The royal commission into aged care has said government did not prepare the sector well enough for the pandemic.In a damning report the commission rejected the government’s repeated claim it...