As second-wave outbreaks of COVID-19 around the world demonstrate, it’s a tricky transition from hard lockdowns to more relaxed, but still effective, measures.

The responses of different nations (Sweden and Taiwan, for example) have their champions, but the truth is there no shining example to follow on how to keep the coronavirus in check while returning, as much as possible, to living life as before.

Right now the government of Victoria, Australia’s second most populous state, is involved in just such an experiment. Its success in moving beyond lockdown to a sustainable “COVID-normal” will hold lessons for nations still on the upward curve of their own second waves (such as Austria, France, Germany, Italy and Britain).

There are also lessons for other Australian states, which have relied (perhaps too much) on hard borders to keep the virus out rather than new social norms to manage the virus.

The Victorian response will prove to be a template to emulate. Or dissected for pitfalls to avoid.

Read more: As a second wave of COVID looms in the UK, Australia is watching closely

As behavioural economists, we’re interested in what drives cooperative, and non-cooperative behaviour. We’re particularly interested in how rules, and law enforcement, shape social norms, as well how they can inadvertently lead to greater resistance and rule-breaking.

One clear point evident from the Victorian experience is how blunt the tools of lockdown and law enforcement are to achieve social conformity to new behavioural norms. Moving to “COVID-normal” will require looking for other, less punitive ways to get people to do the right thing. 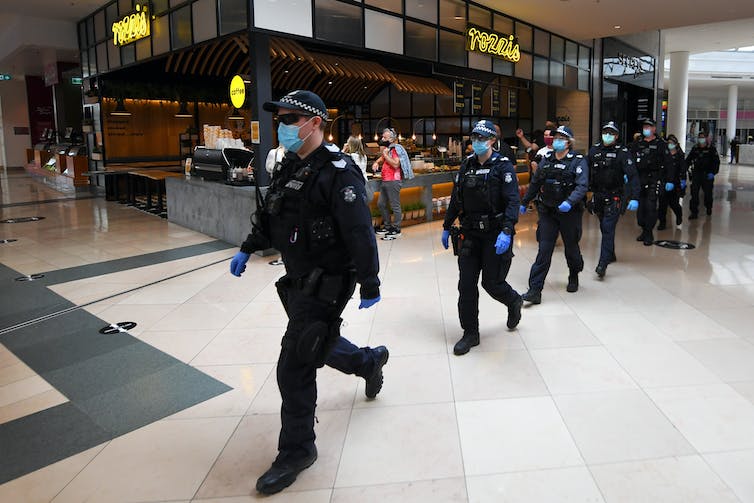 Till now the approach of the Victorian government has been very blunt indeed. Its stage 4 rules have been among the more severe imposed in any democracy in the world. These rules have been criticised as excessive or unnecessary, but they have been simple and straightforward. Both to follow and to enforce.

This the Victorian police force has done with zeal, empowered by harsh fines for breaches of public health directives. Though their job has undoubtedly been made harder by rule breakers emboldened by conspiracy theories, videos of police forcefully arresting resisters have both confirmed protesters’ paranoia about living in a police state, and eroded community support. 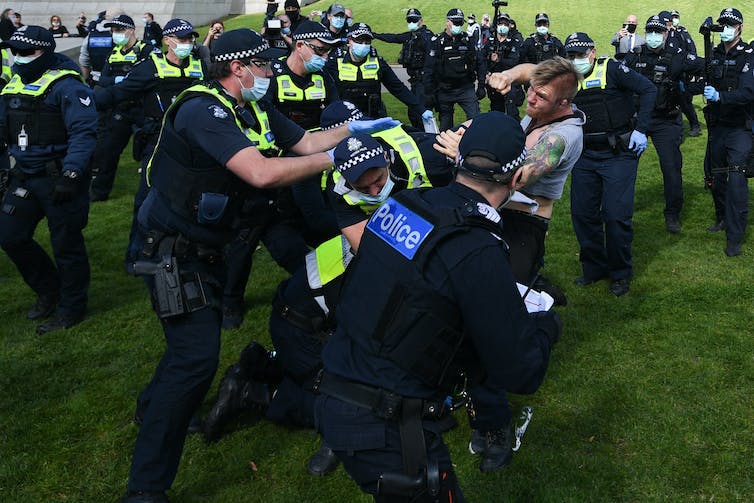 Remember, remember the fifth of September: police and protestor scuffle during an anti-lockdown protest at the Shrine of Remembrance in Melbourne, September 5 2020. Erik Anderson/AAP

Polling by Roy Morgan in mid-September showed just 11% of Victorians now rate the Victorian police very highly for honesty and ethical standards, compared to 37% in 2017. Overall approval has fallen from 76% to 42%.

This loss of trust reflects scandals such the Lawyer X case (which led to a royal commission). But “heavy-handedness” enforcing COVID-19 rules was the next most cited concern, with the poll taken after the circulation of videos including police forcibly removing a woman from her car and arresting a pregnant woman in her home for promoting protests on social media. Community support for restrictions is also fraying.

Read more: WHO is right: lockdowns should be short and sharp. Here are 4 other essential COVID-19 strategies

Laws are necessary, but philosophers since Plato have told us that societies only function when people comply with social norms when no one is looking. It is impossible to maintain social order solely through the deterrent effect, by detecting and punishing wrongdoers.

Gary Becker, winner of the Nobel prize for economics in 1992, was the first to apply economic theory to why people obey or break laws. In his seminal 1968 paper Crime and Punishment: An Economic Approach, he explained how a “rational” individual weighs up the expected gains or losses from committing a crime and compares them to gains or losses of not committing a crime. That calculation includes judging the probability of being caught.

This framework assumes most people have an aversion to risk and that penalties (such as a large fine) therefore have a deterrent effect.

The problem is humans aren’t necessarily rational. Driven by feelings rather than cognitive assessments, most of us inaccurately assess probabilities. Behavioural research suggests 80% of us are prone to optimism bias when assessing personal risk. We tend to underestimate the likelihood of experiencing bad events such as divorce, being in a car accident, contracting a disease or getting caught breaking the rules.

While it’s impossible to know the motivations of the more than 20,000 Victorians so far fined for breaking lockdown rules, the anecdotal evidence suggests most have simply underestimated the chance of being caught, such as breaking the 5 km travel limit to buy a PlayStation controller, or curfew to buy cigarettes. 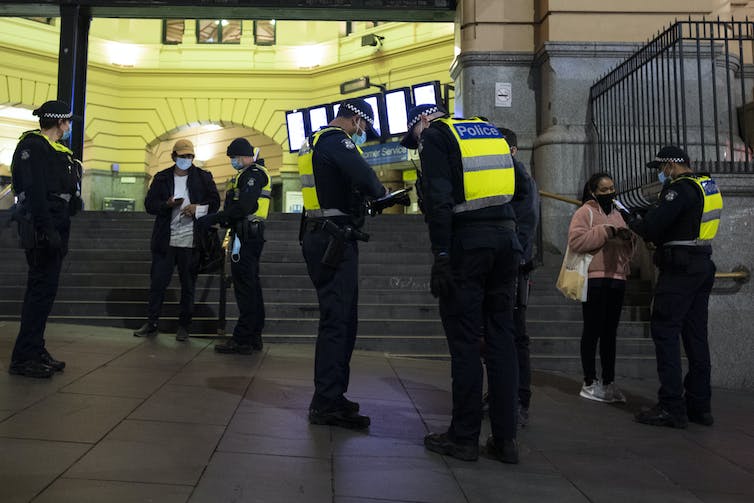 The limits of perception

Yet as the Victorian government moves to relax its restrictions, its main solution to ensuring adherence to the more complicated rules for “COVID-normal” social interactions appears to be increasing penalties for breaches. The fine for breaching social gathering restrictions, for example, has been increased from A$1,652 to A$4,957.

This make Victoria’s next stage of norm-enforcement highly problematic, given behaviour now outlawed isn’t criminal per se, but what used to be normal socialising. As questions asked at Victorian premier Danial Andrew’s press conference on Sunday indicate, there’s a much greater likelihood of confusion about rules – and therefore breaches.

Because extrinsically motivated behaviours are not inherently interesting and thus must initially be externally prompted, the primary reason people are likely to be willing to do the behaviours is that they are valued by significant others to whom they feel (or would like to feel) connected, whether that be a family, a peer group, or a society.

Economists Raymond Fisman and Edwards Miguel illustrate the power of non-punitive “nudges” to encourage these motivators in their book Economic Gangsters (2010). A classic example comes from Bogota, the capital of Columbia, where in the 1990s new mayor Antanas Mockus decided to tackle crime and problems such as traffic fatalities using “cultural persuasion” rather than more law enforcement.

Rather than employing more police to patrol the roads, the city instead employed hundreds of mime artists to mimick and ridicule drivers and pedestrians doing the wrong thing. As Mockus explained:

The idea was that instead of cops handing out tickets and pocketing fines, these performers would “police” drivers’ behaviour by communicating with mime – for instance, pretending to be hurt or offended when a vehicle ignored the pedestrian right of way in a crosswalk. Could this system, which boiled down to publicly signalled approval or disapproval, really work?

The evidence is it did. Within a decade traffic deaths were halved. Other novel strategies helped cut Bogota’s homicide rate by 70%.

These are obviously long-term results. They don’t provide a perfect template for governments seeking immediate society-wide adherence to new COVID-safe behavioural norms. There are no easy solutions, particularly given a small segment of the population is convinced flouting the rules is a noble stand against tyranny.

Read more: Melbourne is almost out of lockdown. It's time to trust Melburnians to make their own COVID-safe decisions

But with Victorian courts already facing a huge backlog of unpaid or contested fines, and the high likelihood we will need to practice “COVID-safe” behavioural norms for at least a year, it’s time to start thinking about other ways to promote social cooperation other than the long arm of the law.