North-central New South Wales today is known for its arid, drought-prone climate. During the Cretaceous period, however, it was a lush coastal floodplain with a high diversity of vertebrates including dinosaurs, crocodiles, turtles and soaring pterosaurs. 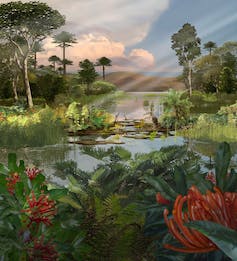 Australian landscapes during the Cretaceous Period would have been much unlike today’s. Karen Carr/Australian Museum, CC BY-NC-ND

New insights gleaned from opalised teeth, found near the town of Lightning Ridge, are now helping paint a picture of the most enormous dinosaurs to ever roam the planet: sauropods.

Our work, published today in the journal Lethaia, reveals up to three different sauropod species once lived in the region, feeding at different heights within the forest canopy.

Opalised fossils are natural casts made entirely out of opal. While they generally don’t preserve the original organism, they do preserve its shape.

In Lightning Ridge, opalised fossils are a rich source of palaeontological information. For decades, miners have excavated these fossils — including the sauropod teeth we studied — from deep underground its opal fields.

The sauropods were a group of dinosaur species with markedly long necks, long tails and a herbivorous diet. Potentially weighing up to 90,000 kg, they were the largest animals to have ever walked the Earth.

However, whether this diversity was unique to Queensland, or extended into more southern regions, remained unknown.

The wisdom in studying teeth

For our study, we examined 25 sauropod tooth fossils aged between 95-100 million years old. From these, we identified five “morphotypes”, or tooth-shape categories. Several features of a tooth can define its morphotype, including its symmetry, the presence or absence of grooves and wear patterns.

Humans have multiple morphotypes within their mouths, such as molars for grinding, incisors for nipping and canines for grasping. But unlike humans, we know all the teeth of sauropod species would have served similar functions and would have thus had little variation.

This is good news for us, because it means we can be pretty confident sauropod tooth fossils with different shapes came from different species.

Five sauropod teeth fossils (not to scale) showing the diversity of tooth shapes found at Lightning Ridge. The fossils have different colours since they’re all made out of opal. Timothy Frauenfelder

We interpreted three of the five morphotypes in our fossil collection as coming from the upper jaw and the other two from the lower jaw. By comparing our fossils with those from more completely studied sauropods, we were able to link them with at least three distinct species that would have cohabited the area around what is now Lightning Ridge.

While we couldn’t assign the 25 tooth fossils to specific species (as we’d need more than just teeth to identify a dinosaur species), we do know all the teeth belonged to a large group of sauropods known as Titanosauriformes.

This group included the late Jurassic Brachiosaurus, which famously reared-up on its hind legs in the 1993 movie Jurassic Park.

You may remember this iconic Brachiosaurus scene from Jurassic Park.

Also, one of the morphotypes likely came from a later subgroup of Titanosauriformes, called Titanosauria. This group contained species such as the truly gigantic dinosaurs Argentinosaurus and Patagotitan.

A tooth tells the truth

Tooth fossils aren’t only useful to gauge past diversity, but also to infer diets of long-extinct animals. The dietary link is evident since teeth are the primary tool for obtaining and processing food.

When studying teeth, one way we can interpret diets is through looking for “microwear”. This refers to an assortment of small features found on teeth from tooth-to-food or tooth-to-tooth contact.

These features can be preserved in tooth fossils as scratches or pits visible on worn surfaces. Specifically, the ratio of scratches to pits can indicate the grittiness, or smoothness, of a dinosaur’s diet.

While microwear patterns of North American sauropods have been extensively researched, this is the first time they’ve been observed in sauropods from Australia. 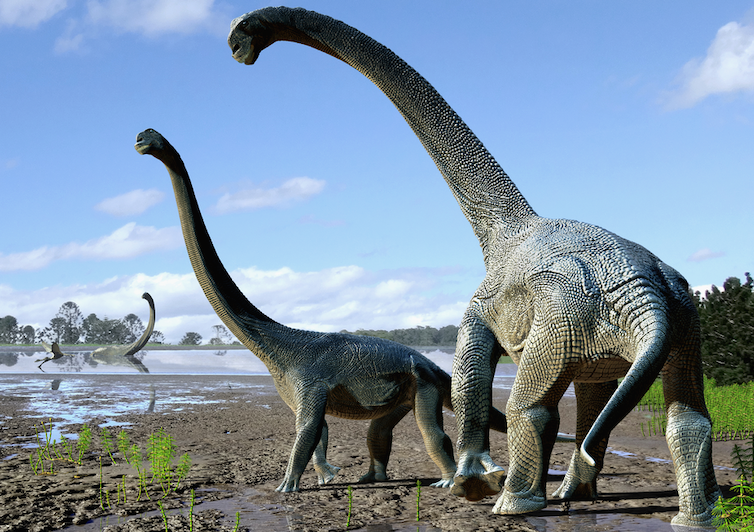 Savannasaurus elliottorum (nicknamed ‘Wade’) — the only species in the Savannasaurus genus — was one of several long-necked sauropods that existed in Queensland during the mid-Cretaceous period. Travis Tischler/Australian Age of Dinosaurs Museum of Natural History, CC BY-NC-ND

Zooming in on pits and scratches

Interestingly, the fossils that did preserve microwear also had different morphotypes. This suggests at least two of the three sauropod species that once roamed NSW were able to coexist by consuming different food within the forest canopy.

Our research may have been limited to teeth, but it demonstrates even incomplete fossils can provide key insights into the lives of long-extinct creatures.

Importantly, it discloses the fascinating sauropod diversity that once inhabited New South Wales, previously identified only in Queensland.

Much like animals today, we believe their coexistence would have depended on them eating different foods in the same area. This would have led to a colourful, cosmopolitan dinosaur landscape in a past, much different, Australia.

Read more: Has dinosaur DNA been found? An expert explains what we really know