US Secretary of State-designate Antony Blinken promises both awkwardness and opportunity for Australia’s Morrison government.

Blinken could hardly represent a more striking contrast with his soon-to-be predecessor Mike Pompeo in his views on the need for America to reinvigorate alliances and address pressing global issues such as climate change.

He will bring to the job a lifetime of experience as a staff member of the Senate Foreign Relations Committee, foreign policy aide to President-elect Joe Biden over many years, and deputy secretary of state in the Obama administration.

The Blinken worldview could be summed up as “America together”, not “America first”. It was given expression in useful detail at a July 9 Hudson Institute dialogue on American Foreign Policy. This document should be compulsory reading for Coalition foreign policy advisers.

First, let us consider the awkwardness for Australia of a Biden administration in which Blinken will play a central role.

After loitering in the shadows of a virtually non-existent US climate policy, the Australian government will now have little choice but to engage more constructively in global efforts to address global warming.

Morrison and his ministers will find it increasingly awkward to avoid a commitment to net zero global greenhouse emissions by 2050, in line with the policies of a new US administration.

Read more: What would a Biden presidency mean for Australia?

Biden has foreshadowed such a commitment as a cornerstone of US foreign policy.

Likewise, Australia’s fudge of making use of leftover Kyoto carbon credits to enable it to meet its climate targets under the Paris Agreement will be difficult to sustain in a new more climate-activist era. 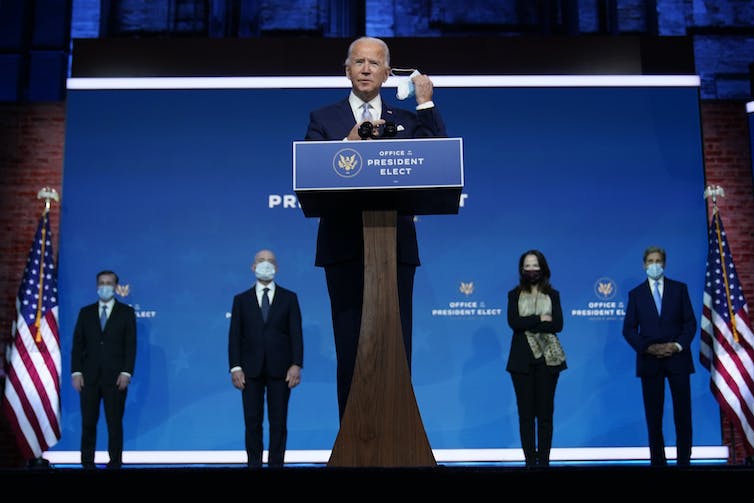 President-elect Joe Biden has signalled he will move to net zero carbon emissions by 2050. Australia has yet to make such a commitment. AAP/AP/Carolyn Kaster

This state of affairs will have implications for Australian domestic politics, in which counterproductive climate politicking has left the country without a sustainable energy policy for more than a decade.

This reflects poorly on successive governments.

Biden’s commitment to rejoin the Paris Agreement from “day one” and the centrality of climate policy in his administration was amplified by Blinken at the Hudson event. He said:

Quite simply, [climate change] is arguably the one truly existential issue that we face. It has to be, and under a Biden administration would be, a number-one priority.

Blinken said that among early priorities of a Biden administration would be the convening of a summit of the world’s major carbon emitters to:

…rally countries not just on sticking with Paris, but to actually raise their ambitions and try to push progress further and faster.

He gave notice the US would work to insist that China:

…stop subsidising coal exports and outsourcing pollution to other countries by financing billions of dollars’ worth of dirty fossil fuel energy projects through the Belt and Road Initiative.

These initiatives will inevitably have implications for Australian coal exporters.

Read more: Hopes of an improvement in Australia-China relations dashed as Beijing ups the ante

Blinken also talked about “locking in enforceable commitments to reduce emissions in global shipping and aviation”.

These are ambitious goals by any standards, and will inevitably feed into Australian policy debate. The Morrison government’s choice is either to get with the program or allow itself to be regarded as an outlier, along with Brazil and Saudi Arabia, of countries resistant to coordinated global efforts to bring down carbon emissions.

A chance to thaw the frost with China

On China, where Australian government policy has been all at sea, the incoming administration presents Australia with a chance to reset its relationship with its most important economic partner. 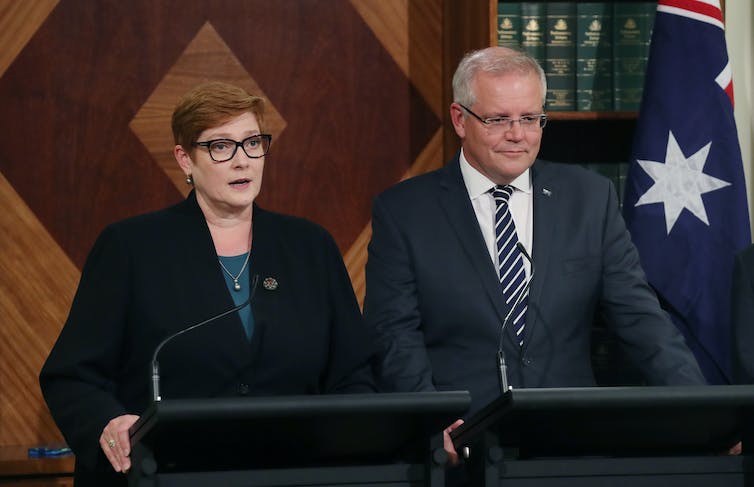 The incoming US administration should offer the Australian government, among other things, a chance to again re-set its testy relationship with China.

Those attempts at such a reset surfaced in a speech this week by Morrison to the UK Policy Exchange, a London-based conservative think tank. Here, the prime minister put aside some of the bluster that has characterised recent exchanges, in which Australia promised not to succumb to Chinese bullying.

Australia is not and has never been in the economic containment camp on China […] Australia desires an open, transparent and mutually beneficial relationship with China as our largest trading partner.

These words are unexceptional in themselves. But they clearly amount to an attempt by Morrison to take advantage of the potential for a fresh start offered by a new administration in Washington.

Blinken’s remarks on China to the Hudson Institute should be given close attention in Canberra. He points to the need for America to restore confidence in its own democracy first, so as to be in a sounder position to counter China’s rise.

Beijing had been able to take advantage of America’s inward-looking domestic turmoil over the past four years to advance its own global reach.

In turn, the US needed to revitalise its alliances to deal with China’s rise. Once that is done, a Biden administration would be able to:

…engage China and work with China, in areas where our interests clearly overlap, whether it is again contending with climate change, dealing with global health and pandemics, [or] dealing with the spread of dangerous weapons. We’re much better off, though, finding ways to cooperate when we’re acting from a position of strength than from a position of weakness.

These sentiments should be welcomed in Canberra, where a ragged China policy in recent years has tended to be consumed by security concerns. Restoring balance to that policy in coordination with an American push to bolster alliances of Western democracies would be desirable.

At his Hudson Institute event, Blinken addressed a range of contentious foreign policy issues. These included the vexed question of what to do about Iran’s nuclear ambitions. Biden has indicated he would like to revive America’s participation in the Iran nuclear deal abandoned by Donald Trump. However, this will be easier said than done, given the progress Tehran has made towards acquiring a breakout nuclear capability.

I think we would be doing less not more in the Middle East.

This view no doubt reflects frustrations Blinken himself has experienced over many years in seeking to bridge seemingly intractable conflicts, such as the Palestinian issue, at the expense of other priorities.

Former Secretary of State John Kerry’s designation as America’s climate envoy attests to a Biden administration’s commitments on the global warming front. Kerry was one of the architects of the Paris Agreement.

Blinken’s nomination as secretary of state should be regarded as a positive development from Australia’s perspective, given his significant foreign policy experience and his proclaimed willingness, indeed determination, to work with friends and allies.

The Australian government, marinaded in a security mindset, would be advised to buy into what promises to be a much more expansive American foreign policy with climate as its centrepiece.

Home-delivered food has a huge climate cost. So which cuisine is the worst culprit?

ShutterstockOver the past few years, Australians have embraced online food delivery services such as UberEats, Deliveroo and Menulog. But home-delivered food comes with a climate cost, and single-use packaging is...

When the coronavirus pandemic hit Australia in March 2020, the Morrison government took bold and imaginative action. The most notable examples were its income support programs – JobKeeper, paying a...

The Conversation, CC BYWe’ve probably all been there. We buy some new smart gadget and when we plug it in for the first time it requires an update to work.So...

To learn at home, kids need more than just teaching materials. Their brain must also adapt to the context

ShutterstockResearch during the first phase of remote teaching in Victoria reported some students found the workload “too high”, missed interactions with peers, felt their thinking ability was impaired, and reported...

Circa's Humans 2.0 is a visceral delight

Do you feel undervalued and overworked? COVID-19 is likely to affect the employed too

ShutterstockThere’s no question the rising rate of unemployment is one of the worst consequences of the COVID-19 pandemic. The number of Australians seeking work is heading towards 10%, almost double...

restoring trade with China in a hostile political environment

The new trade minister, Dan Tehan, has been handed one of the Morrison government’s most demanding roles. Despite a lot of chest-thumping in government circles about the need to stand...

Despite appearances, this government isn't really Keynesian, as its budget update shows

It is tempting to think the Australian government’s decision to spend big – bigger than ever before, an unprecedented 33% of GDP this financial year according to the budget update...

The Pfizer vaccine may not be the best choice for frail people, but it's too early to make firm conclusions

Reports of about 30 deaths among elderly nursing home residents who received the Pfizer vaccine have made international headlines.With Australia’s Therapeutic Goods Administration (TGA) expected to approve the vaccine imminently...

Curious kids: how do gills work?

David Clode/Unsplash, CC BYHow do gills work? Tully, aged 7Great question, Tully! Animals on land breathe air, which is made up of different gasses. Oxygen is one of these gases...

There's no such thing as 'alternative facts'. 5 ways to spot misinformation and stop sharing it online

ShutterstockThe blame for the recent assault on the US Capitol and President Donald Trump’s broader dismantling of democratic institutions and norms can be laid at least partly on misinformation and...

As Trump exits the White House, he leaves Trumpism behind in Australia

Mick Tsikas/AAPThrough recent natural disasters, global upheavals and a pandemic, Australia’s political centre has largely held. Australians may have disagreed at times, but they have also kept faith with governmental...