As one of the longest structures in the world, the dingo fence is an icon of Australia. It stretches more than 5,600 kilometres across three states, including 150 kilometres that traverses the red sand dunes of the Strzelecki Desert.

Since it was established in the early 20th century, the fence has had one job: to keep dingoes out. The effect of this on the environment has been enormous — in fact, you can see it from outer space.

Our research has, for the first time, used satellite imagery to show the effects of predators on vegetation at a vast scale.

Dingoes eat kangaroos, and kangaroos eat grass. So on the side of the fence where dingoes are rare, there are more kangaroos, and less grass cover between sand dunes. This has important flow-on effects for the ecosystem in the region.

Similar changes to vegetation may have occurred throughout the world, where other large predators, such as wolves or big cats, have been removed. But these aren’t visible without the stark contrast boundaries like the dingo fence provide.

Today, dingoes “inside” the fence continue to be killed by various means (not all of them humane), including poison baits, trapping and shooting. 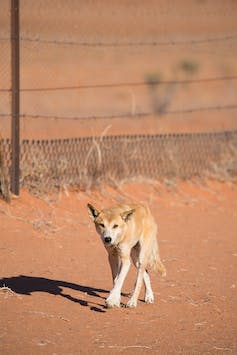 Where dingoes are removed, increasing populations of kangaroos can lead to overgrazing. Nick Chu

It has long been understood that removing large predators can drive changes in ecosystems across large areas. A well-known example is the removal of wolves in Yellowstone National Park in the 1920s, which saw an elk grazing increase, limiting the growth of tree and shrub seedlings.

Where dingoes are removed, increasing populations of kangaroos can lead to overgrazing. This, in turn, damages the quality of the soil, making the landscape more vulnerable to erosion.

Less vegetation can also leave small animals, such as the vulnerable dusky hopping mouse, exposed to other threats like cat predation. Indeed, 2019 research showed dingoes “outside” the fence keep cat and fox populations down in the Strzelecki Desert.

Read more: Like cats and dogs: dingoes can keep feral cats in check

And research from 2018 showed dingo removal could even reshape the desert landscape, as changes to vegetation alter wind flow and sand movement.

Changes this large can’t be seen from the ground

Often, however, the effects of removing predators have gone unnoticed. There are two main reasons why.

First, many large predators were removed before scientists monitored ecosystems. For example, wolves were hunted to extinction in Britain during the 17th or 18th century (although there are now proposals to reintroduce them).

Second, changes occur over such large areas, so it’s difficult to spot any differences when researching from the ground.

So to gauge the impact of the fence, we used images captured by sensors on the NASA Landsat satellites, which have been regularly observing the Earth since 1972.

We looked at a section of the fence that follows the state border of New South Wales through the Strzelecki Desert, and used this to analyse the effects of removing a top predator.

We used images processed for Australia by the Joint Remote Sensing Research Program, which are publicly available.

Using thousands of field measurements, each satellite image was converted into an image of “fractional cover”. This splits the landscape into three core components: bare soil, green vegetation and dead or dry vegetation.

Read more: Kangaroos (and other herbivores) are eating away at national parks across Australia

The dead vegetation fraction, which includes all non-photosynthetic material such as dry leaves and twigs, is particularly useful in the desert. It’s a more reliable indicator of vegetation cover, as green vegetation only sticks around for three months or so after rain.

Viewing “natural colour” satellite images of the Strzelecki Desert, as our eyes see the world, doesn’t show the differences across the dingo fence very well. But when we view images of dead vegetation cover a few months after rainfall, we can see the stark effect kangaroo grazing has on the landscape, where dingoes are rare.

You can see these effects in the images below. 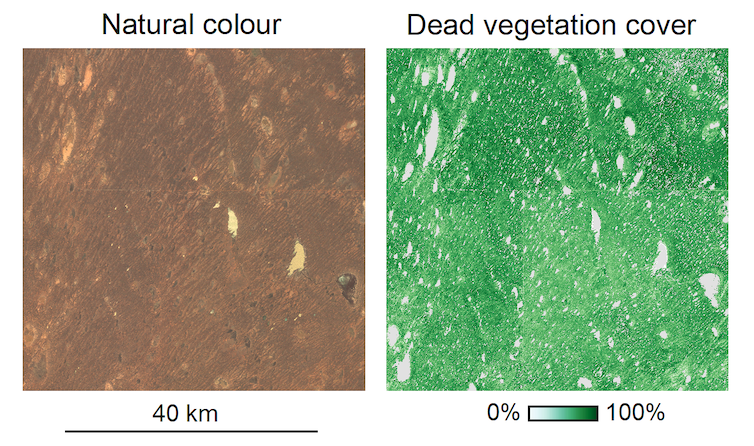 A natural colour Landsat image from winter in 2011 after a large rainfall event (left) does not show the dingo fence, though it does when converted to dead vegetation cover (right). Adrian Fisher 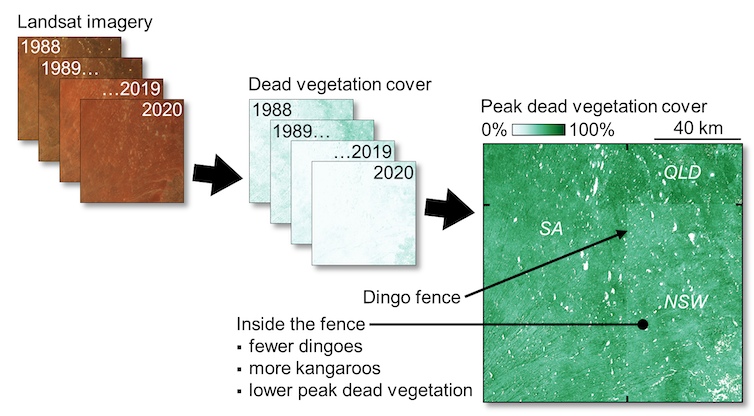 The results from satellite images were supported by ground surveys. This included repeated nighttime counts of kangaroos and dingoes seen with powerful spotlights.

We also fenced off plots and observed how the vegetation changed. After five years, the kangaroo-free plots in the dingo-free areas looked like islands of grass in an otherwise bare desert. 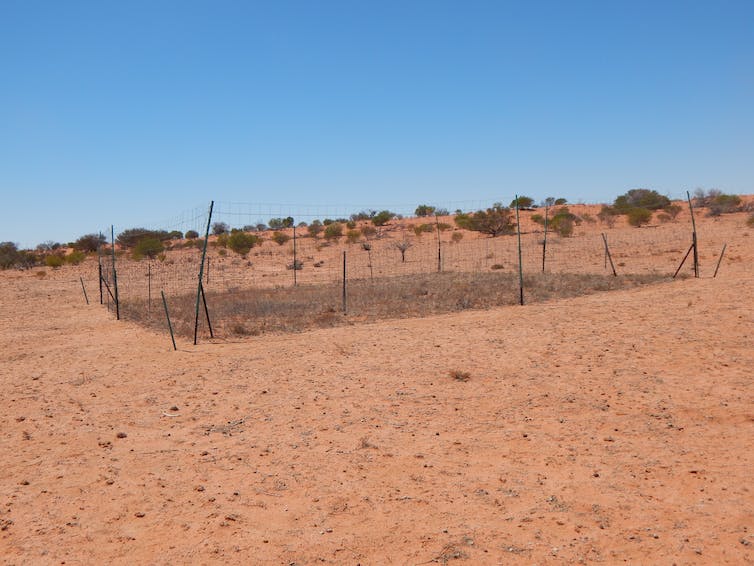 One of the fenced plots excluding kangaroos in Sturt National Park, western NSW, showing a clear difference in vegetation cover due to grazing pressure where dingoes are rare. Mike Letnic

What do we do about dingoes?

So, should we tear down the fence to reintroduce dingoes back into landscapes for the biodiversity benefits, like wolves in Yellowstone?

There are no simple answers to this question. Allowing dingoes to return to the landscape inside the fence will reduce kangaroo numbers and increase grass growth — but will also devastate sheep farming.

Conservationists, farmers and other land managers need to start discussing where and how we can safely return dingoes to landscapes, finding a balance between restoring ecosystems and protecting farms.