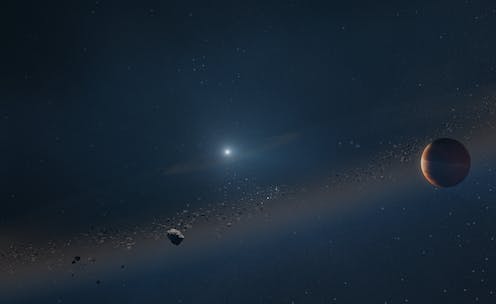 The golden age of discovery of planets around other stars (known as exoplanets) began in 1995. Since the first discoveries, more than 4,500 worlds have been found, most of them orbiting ordinary stars like our Sun.

The Sun is about 4.6 billion years old, and Earth and all the other planets formed at about the same time. But what will happen to the planets in another 5 billion years, when the Sun eventually dies?

In a new study published in Nature, we show a glimpse of the possible future of our Solar System, when the Sun burns through all its hydrogen fuel and becomes a dead star called a white dwarf.

This possible future is depicted in the form of a white dwarf thousands of light years away, which hosts a gas giant planet on a similar orbit to Jupiter, between 2.5 and 6 times as far from its star as Earth is from the Sun.

The journey to this discovery began in 2010, when the white dwarf and its Jupiter-like companion aligned perfectly with a much more distant star in the dense star fields at the centre of the Milky Way.

The gravity of the white dwarf and its companion acted like a magnifying glass, bending the light from the distant star and making it appear brighter to observers here on Earth. This effect, known as “gravitational microlensing”, was predicted by Einstein in 1936.

Read more: How we found a white dwarf – a stellar corpse – by accident

But details in how the magnification of the background star changes over time can be used to reveal properties of the closer star and its planet. So an international team of astronomers led by those from the University of Tasmania and NASA Goddard headed to Hawai’i to use one of the largest telescopes in the world for a better look.

The Keck-II telescope atop the dormant Mauna Kea volcano has a 10-metre interlocking array of hexagonal mirrors and “laser-guided adaptive optics” to filter out “twinkling” caused by changes in the atmosphere. We used it to obtain extremely high-resolution images of both the background and foreground star.

To our surprise, however, we could not see the foreground star at all. Predictions from the original magnification event in 2010 indicated that this star, weighing about half as much as the Sun, should be visible. But we could not detect it.

After a few years grappling with our data to ensure we weren’t making a mistake, we realised we could not see the star because it is a white dwarf, which in this case was too faint to detect.

White dwarfs are Earth-sized remnants of ordinary stars like our Sun. About 95% of the stars in the Milky Way will eventually become white dwarfs.

In about 5 billion years’ time, when the Sun burns through all its hydrogen fuel, it will balloon in size to become a red giant, likely obliterating Mercury and Venus in the process. Earth may also be destroyed, or at least severely disrupted; if by some miracle humankind still exists by then, our distant descendants will have to move off-world to survive.

In the red giant phase, the Sun can delay its inevitable collapse by burning heavier atoms such as helium. However, this reprieve will last only 100 million years or so.

When these heavier fuels run out, the Sun will collapse into its final white dwarf state. In the collapse, the Sun will blow off about half its mass as a cloud of hot gas and push the surviving planets into a wider orbit.

For the planets, there is a fine balancing act between being swallowed up during the expansion of the red giant and possibly being ejected into deep space when the white dwarf forms. Our discovery shows what some theorists have predicted: that planets at wide enough orbits are likely to survive the death of their host star.

Because most stars end up as white dwarfs, we don’t have a very precise estimate of what this system looked like when it formed. However, the statistics favour an origin as a star not too different in mass from the Sun.

The Universe isn’t old enough for stars smaller than about 80% as big as the Sun to have evolved into white dwarfs, and stars more than about twice the size of the Sun are intrinsically rare and also more likely to experience more turbulent deaths that would destroy their planetary systems.

Using the Hubble Space Telescope or its successor, the James Webb Space Telescope (due to launch in December 2021), we hope to learn more about the system by directly measuring the incredibly faint residual light emitted by this dead sun.

Read more: James Webb Space Telescope: An astronomer on the team explains how to send a giant telescope to space – and why