The Australian government is undertaking its biggest defence build-up since the second world war. Research partnerships between Australian universities and defence industries raise major ethical concerns, and may be at odds with the principles of academic freedom.

In its 2016 Defence White Paper, the Australian government committed to an 81% increase in the Defence budget over a decade. The paper also outlined plans to recruit 4400 new Australian Defence Force employees.

Prime Minister Malcolm Turnbull also recently announced a $3.8 billion investment in the arms manufacturing industry. The hope is Australia will become one of the world’s top 10 weapons exporters. 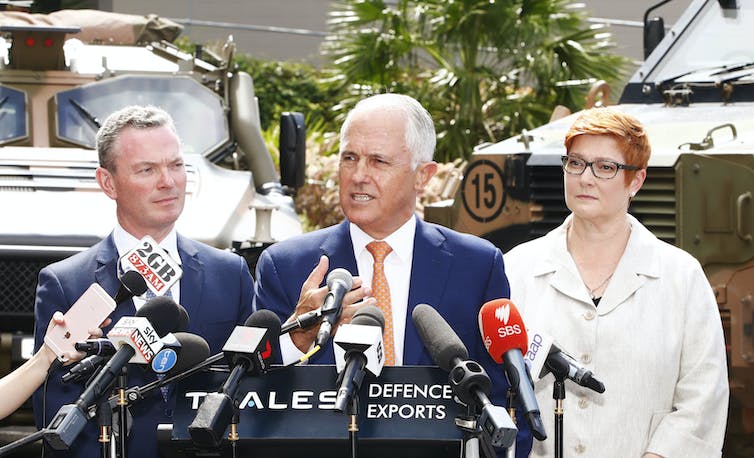 Minister for the Defence Industry Christopher Pyne, Prime Minister Malcolm Turnbull, and Minister for Defence Marise Payne address the media during a visit to a defence manufacturer in January, 2018. Daniel Munoz/AAP

The government has turned to higher education to help fulfil these goals. It needs graduates with the skills to grow and sustain the military and weapons industry, and academic research that contributes to the development of military technologies.

Intensifying ties between universities, the Department of Defence and weapons manufacturers make sense within the government’s wider militarisation efforts. But they may not be ethically justifiable.

This is Lockheed Martin’s first research centre outside of the US. The centre will “will provide PhD scholarships and internships, while directly funding research projects and co-authoring applications in the future”. Only a fortnight ago, the University of Melbourne signed another similar agreement – this time with UK weapons manufacturer BAE Systems. 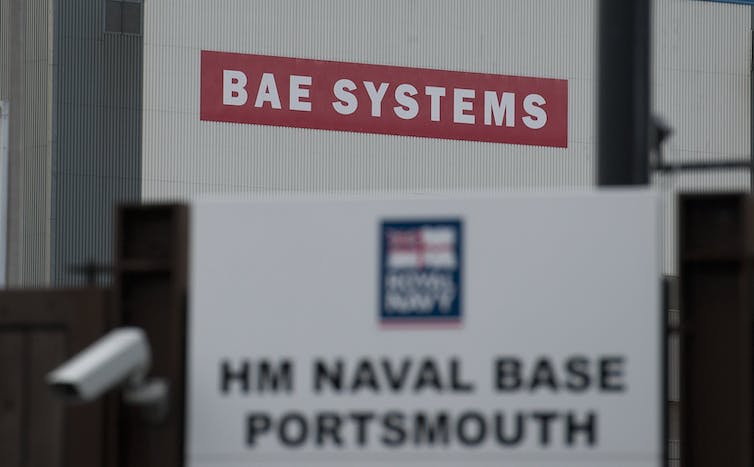 British weapons manufacturer BAE Systems has research partnerships with a number of Australian universities. Will Oliver/AAP

Victorian universities are not alone. Adelaide University, Flinders University and University of South Australia are all part of a research network funded by BAE Systems. According to a BAE Systems press release, this partnership involves “creation of new defence-focused courses and targeted research and development”.

There are 32 Australian universities participating in the Defence Science Partnerships program, so more research partnerships will likely emerge soon. In addition, last year Australia’s Department of Defence partnered with the US Department of Defence on the Multidisciplinary University Research Initiative. This program provides grant funding to Australian universities willing to produce research on “designated topics” with “potential for significant future defence capability”.

These partnerships raise serious ethical concerns. In the past, Lockheed Martin has faced allegations of corruption for political lobbying in the US. In the 1970s, senior officers were found to have coordinated a “program of foreign bribery”. The company still sells its weapons to repressive regimes and governments accused of war crimes, such as Israel, and Saudi Arabia. 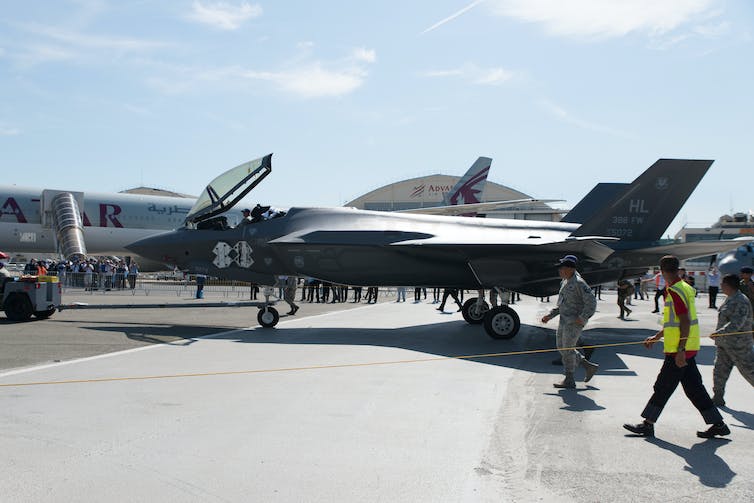 Lockheed Martin has been under scrutiny for unethical behaviour in the past. Quentin Veuillet/AAP

BAE Systems has faced allegations of bribery and fraud. Its third largest customer is Saudi Arabia (representing 21% of its sales), and its airplanes are used in Saudi Arabia’s current bombardment of Yemen. BAE Systems continue to sell to Saudi Arabia despite protest from non-government organisations, and research showing that one in three air raids have hit civilian sites in Yemen.

Lockheed Martin and BAE Systems are also major manufacturers of nuclear weapons, which are subject to categorical prohibition in the new UN Treaty on the Prohibition of Nuclear Weapons. A growing number of financial institutions are divesting from companies that develop these weapons.

Read more: Australia must sign the prohibition on nuclear weapons: here's why

Universities have downplayed the nature of these companies and the purpose of their research and products. Promotional materials refer to “advanced technology companies” rather than weapons manufacturers. There is no mention of war and surveillance, only “cutting edge technology”.

Academic freedom could be at risk

Another significant ethical concern is military funded research will be expected to demonstrate military value.

In the US, universities are highly reliant on Pentagon funding, particularly for STEM disciplines. US academics have debated the ethics of military-funded research in many fields, most recently neuroscience.

Read more: Margaret Gardner: freezing university funding is out of step with the views of most Australians

The likelihood of academic research being directed towards military objectives is heightened if military funding begins to crowd out alternative sources. This is a possibility in Australia, given the defence budget increase and the wealth of overseas weapons manufacturers.

As Australian research councils struggle and universities face a funding freeze, academics with limited funding options may be driven to seek military funding. This could undermine their control over the direction and use of their research. Academics may be less inclined to speak out against military funding if their department, colleagues, or PhD students rely on it.