Universities are vital hubs of research and teaching on climate change. As large organisations, they also have significant emissions, which contribute to our climate crisis. Universities should therefore lead global action to limit climate change. How best can they do this?

It’s Global Climate Change Week. This annual event aims to encourage universities – staff and students – to engage with each other, their communities and policymakers on climate change action and solutions. As organising committee members and academics working on climate change, we explore here what leadership in university-based climate action looks like.

The reasons to act are obvious. In Paris in 2015, the international community agreed to pursue all possible measures to limit the global temperature increase to 1.5°C above pre-industrial levels. But current policies have us on track for an increase of about 3.6°C by 2100.

Read more: Climate change is the most important mission for universities of the 21st century

The need to cut greenhouse gas emissions is urgent – the consequences of not doing so catastrophic.

Universities are big consumers and emitters – some sectors more than others. Universities also have the autonomy to make decisions on sustainability and are increasingly doing so, individually and collectively.

Read more: Astronomers create 40% more carbon emissions than the average Australian. Here's how they can be more environmentally friendly

Organisations like the International Universities Climate Alliance and Australasian Campuses Towards Sustainability support such efforts. Campaigns like Race to Zero, Countdown and the Global Colleges and Universities Climate Letter provide forums for institutions to commit formally to reducing emissions.

And what does this climate action look like on the ground? We’ll start with our university, the University of Tasmania – the case we know best.

Our university punches above its weight, with many climate change research groups and more IPCC authors than any other Australian university. Researchers in social sciences, law, education and humanities are also influential in the study of climate change and its impacts.

The University of Tasmania has closely audited and reduced emissions and offset its remaining emissions. Certified carbon-neutral since 2016, it’s one of only two Australian universities to achieve this status (the other is Charles Sturt University).

Fossil fuel divestment is a process of transition with three elements:

To mark Global Climate Change Week, the University of Tasmania has just announced it aims to divest from any fossil-fuel-exposed investments by the end of 2021. The university already has no direct shareholdings in fossil fuel companies. Its investment strategy will include positive screening, investing in companies that are working towards a zero-carbon economy and the UN Sustainable Development Goals. 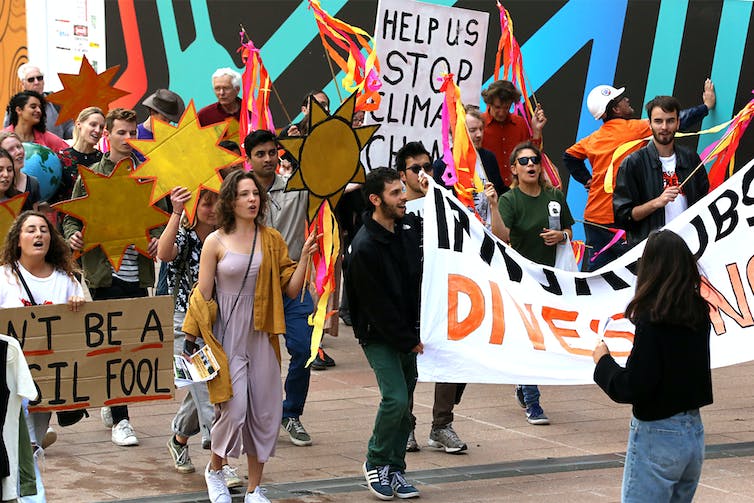 Universities and the university super fund are under increasing pressure to divest from fossil fuels. Danny Casey/AAP

Many universities are making divestment the core of their climate action. In Australia, La Trobe started that trend in 2016.

Globally, one of the largest divestment pushes has come from the University of California Berkley. In 2019, it announced it would divest completely from fossil fuels in its US$126 billion investment portfolio and $70 billion pension fund.

Read more: Want to know if the Paris climate deal is working? University divestment is the litmus test

Some universities are generating their own renewable power.

For example, Deakin University has developed an industrial-scale microgrid: a 14.5 hectare solar energy farm with a 1 megawatt central battery. The project integrates rooftop solar panels and smaller batteries across the Waurn Ponds campus.

The University of Queensland has set up and maintains a A$125 million solar farm just outside Warwick to offset its annual electricity needs.

UQ now offsets 100% of its electricity use with renewable generation.

Read more: In a world first, Australian university builds own solar farm to offset 100% of its electricity use

Monash is investing A$135 million in its Net Zero initiative. Already partly solar-powered, the university has committed to carbon-neutral infrastructure and operations by 2030.

UNSW plans to expand its onsite solar generation and buy 100% renewable power for the remainder, reducing its emissions in line with keeping global warming under 1.5°C.

Universities can and must do more

Many universities have made a start, but they must be more ambitious as climate action leaders. All universities can and should take meaningful and visible action.

This Global Climate Change Week, students, staff, university communities, get informed. Urge your university to divest from fossil fuels, use renewable energy and commit to achieving net zero emissions – soon. Organise your own campus sustainability initiative, or get active in your university’s existing one.

Only by acting to understand and reduce their own climate impacts can universities be credible climate leaders. Their role as platforms for climate change research and engaged political commentary, as well as sustainable institutional practices, makes them global exemplars on climate action. In this, universities are essential to all of our futures.