The invasive ant world is a competitive one, rife with territorial battles and colony raids. And yellow crazy ants (Anoplolepis gracilipes), one of the world’s worst invasive species, have an especially interesting trait: they’re the only invasive ant known to have workers who can reproduce.

Worker reproduction has big implications for a colony’s social dynamic. So we observed and experimented with more than 200 captive colonies of yellow crazy ants to understand what triggers worker reproduction and the potential costs and benefits for the colony.

We used a range of techniques, including removing queens and observing worker behaviour, and setting up ant gladiator rings to test how well reproductive workers fought other ants.

It wasn’t just for fun — learning about ants’ basic biology, including reproduction, may allow us to better understand their success and tailor management programs to help save the ecosystems they threaten.

Life in the queendom

Yellow crazy ants are thought to originate in southern or southeastern Asia but have spread across much of the Indo-Pacific, including several locations in Australia. They’re most well known for the cascade of ecological effects they’ve caused on Christmas Island by killing red land crabs and contributing to the damage, such as tree die-back, caused by scale insects.

Attempts to control or locally eradicate them are ongoing on Christmas Island, in Arnhem Land, and several locations in Queensland, including in and around the Wet Tropics World Heritage Area.

Like honey bees and wasps, yellow crazy ants are social insects. In these colonies, queens, workers and males all play distinct roles.

Queens and workers are all females. The queens reproduce, while the aptly named workers are the colony’s labourers, primarily responsible for bringing in food, caring for the queens’ offspring and defending the colony. The sole role of males is to mate with a queen before dying.

This elaborate task division is thought key to the success of social insects. However, in yellow crazy ant colonies, workers challenge the reproductive monopoly of the queen and produce males.

We could differentiate workers with active ovaries from regular workers by looking at their abdomen, which would be oversized as eggs take up space in the larger workers’ abdomen. 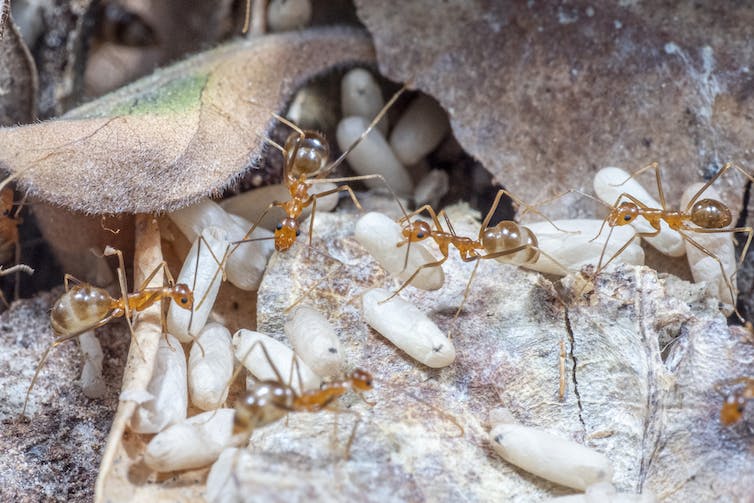 In this picture, the worker ant on the far right has a regular-sized abdomen while the other workers have abdomen that looks swollen. Dr Peter Yeeles, Author provided

When the queen was present, typically less than 20% of workers in our captive colonies had oversized abdomens. When we removed the queen, as much as half of the workers became oversized. We returned the queen after two months, and found the number of oversized workers decreased.

Our findings are consistent with the idea queens inhibit worker reproduction through pheromones, one of many chemical signals in ant colonies influencing ant worker behaviour and colony dynamics. Indeed, an ant queen’s failure to “smell” fertile may leave her subject to eviction or execution.

So, did our yellow crazy ant queen wannabes behave more like workers or royalty? Our observations of oversized and normal workers revealed stark differences in behaviour. 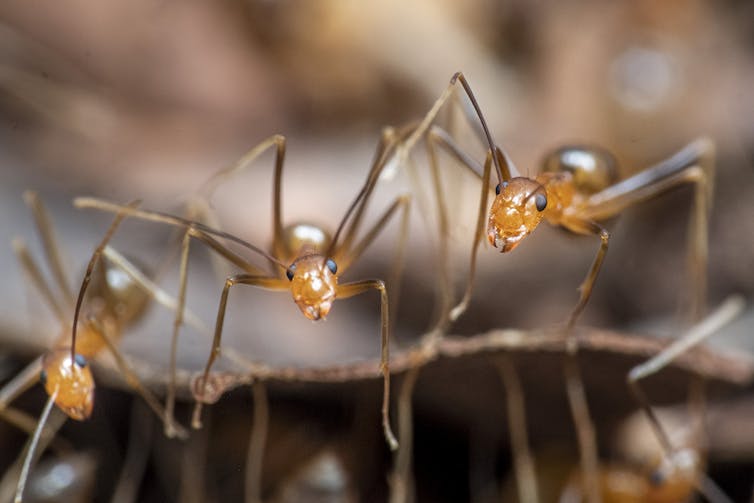 These oversized workers are slow to move when the nests are disturbed, not displaying the fast, erratic movement for which the species is named. Their behaviour was more similar to queens than workers.

Colony and resource defence is another important task for workers, as yellow crazy ant colonies often compete with native ants.

To test how these sluggish workers compare to normal workers in colony defence, we placed three oversized workers in one container, three regular workers in another, and paired each group with one gladiator, the charismatic green tree ant.

Green tree ants (Oecophylla smaragdina) are native and known for being very aggressive and territorial.

Our two videos show the typical response of oversized and regular workers.

In the second video, you can see how oversized workers were more sedentary, less aggressive and less likely to start fighting with the green tree ant than normal workers in the first video. They were also less likely to kill their oppon-ant.

It seems oversized workers are lazy and would be ineffective at defending the colony. So why do they occur at all?

However, if the queen dies after laying eggs, including one destined to become a queen, then the virgin queen who eventually emerges can mate with a worker-produced male. This is important because males are unlikely to be present unless the colony is very large.

So while workers lack organs for receiving and storing sperm, their ability to produce males asexually may extend the life of the colony.

What’s more, oversized workers can produce sterile eggs as well, which serve as food for the queen and other colony members. We believe these workers may be like walking vending machines within the colony, providing food when conditions aren’t suitable for foraging. 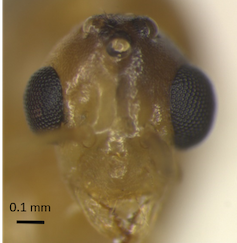 We also found males with mismatched eyes. These odd-looking individuals may possess a female eye on one side and a smaller male eye on the other side.

Such individuals are potentially sex mosaics, with male and female genes spread across their body in patches. Whether these individuals function as normal males is a question for further research.

Researchers don’t know the full story of yellow crazy ant reproduction, but it’s likely to be highly complex and potentially unique. Our study contributes to solving this mystery.

Eradication and control programs for yellow crazy ants will benefit from understanding their reproductive system and behaviour. It can shed light on how even a few workers and eggs — who may be inadvertently moved around by humans or persist after control treatment — could eventually build into large numbers.

Likewise, understanding foraging behaviour is useful for planning insecticidal baiting, because effective baiting relies on foraging ants bringing bait back to the colony to share with queens and larvae.

We have no doubt future genetic work and experiments will shed further light on the fascinating reproductive biology of yellow crazy ants.