We have seen a succession of reviews, plans and election promises of faster and better train services for regional New South Wales, home to one third of the state’s population, in recent years. Yet little had been heard from the state government on track works to allow new trains to travel faster until April 29 this year. This was when Premier Gladys Berejiklian told a Sydney conference that serious regional development will need faster rail (trains moving at 150-200km/h on upgraded track with some straightening of track) and fast rail (speeds of 200-250km/h on new dedicated track).

The promised outcomes include Sydney to Newcastle by rail in an hour rather than two-and-a-half hours, 25 minutes taken off Sydney-Wollongong and Sydney-Gosford train trips and travel between Sydney and Goulburn in under an hour instead of two-and-a-half hours for express trains. Details are still awaited on which lines will take priority and the scope of this work.

Read more: We can halve train travel times between our cities by moving to faster rail

These developments have been years in the making. In late 2018, the NSW government announced international expert Andrew McNaughton would advise the government how best to deliver a fast rail network to connect Sydney to regional centres. Four lines were identified: 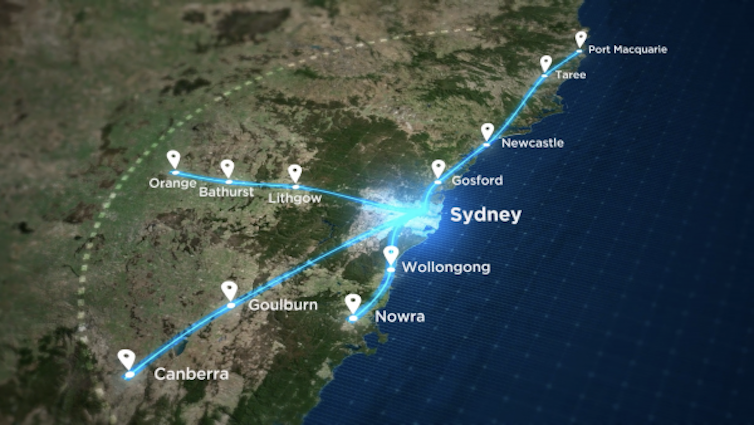 This followed a 20-Year Economic Vision for Regional NSW (recently refreshed), which included a commitment to “make regional travel faster, easier and safer between and within regional centres, and to metropolitan areas”.

There have also been three studies of NSW track upgrades co-funded by the National Faster Rail Agency.

In the lead-up to the March 2019 NSW election, funding was announced for a limited suite of track upgrades on the four main lines linking Sydney to regional NSW. The government also raised expectations of a new line from Eden to Cooma and the reinstatement of the line from Cooma to Canberra.

Read more: How the NSW election promises on transport add up

A NSW government video outlining the promise of fast rail in late 2018.

Much slow running of regional trains on each of the four main lines from Sydney is on sections of track that, about 100 years ago, were reconstructed with less steep climbs than 19th-century track. This allowed steam locomotives to handle heavier loads, but came at the expense of extra length and more curves.

Such track now slows down modern electric and diesel trains. The table below shows the extent of the problem in NSW. It also shows indicative time savings from reverting to straighter track alignments (found in most cases by simulation work by my co-researcher, Max Michell). 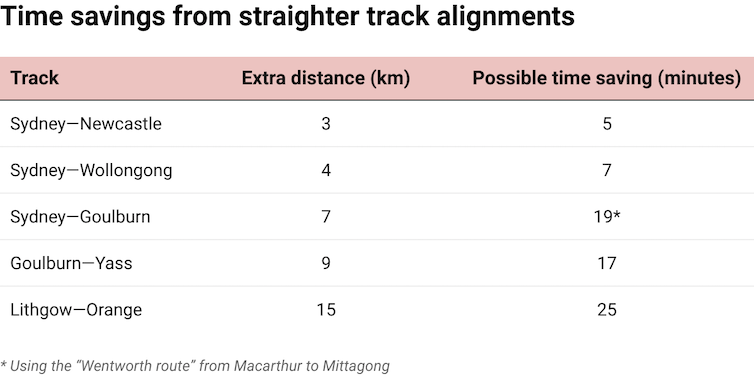 Table: The Conversation. Data: Author provided, CC BY Other states acted decades ago Following track-straightening works between Brisbane and Cairns for faster and heavier freight trains, in 1998 Queensland Rail introduced a tilt train operating at speeds of up to 170km/h between Brisbane and Rockhampton. The train was well received and by 2002 had carried 1 million passengers. In 2004, new Prospector diesel rail cars were introduced to allow Perth-Kalgoorlie services to operate up to 160km/h with an average of 100km/h. Victoria’s Regional Fast Rail Project was mostly completed by 2006. Following track upgrades on four lines to Bendigo, Ballarat (with deviations to improve train times), Geelong and Gippsland, new V/Locity trains travel at 160km/h. Within five years, patronage on these services had doubled. Victoria has followed up with two further extensive track upgrading programs, each with significant federal funding. The first was Regional Rail Link (2009-15). Currently, at a cost of over A$4 billion, Regional Rail Revival is upgrading every regional line in the state. Read more: This is how regional rail can help ease our big cities' commuter crush What about a decent service to Canberra? Sydney-Canberra train services are too few and too slow. High-speed rail options with trains capable of 250km/h or more on dedicated track for Sydney to Canberra, and beyond, have been studied extensively since 1984. In 1998, SpeedRail received in-principle support from the Howard government but that did not extend to financial support. The uptake of bus travel – one operator offers a service on the hour for 12 hours a day – suggests more and faster train services would be well received. In 2020, Infrastructure Australia listed an upgrade of this rail link as a “priority initiative”. The train service linking Australia’s largest city with the national capital has been taken to task by many commentators. It was recently well described as a “national disgrace”. By way of contrast, New York to Washington DC has many more trains, which are much faster than buses. 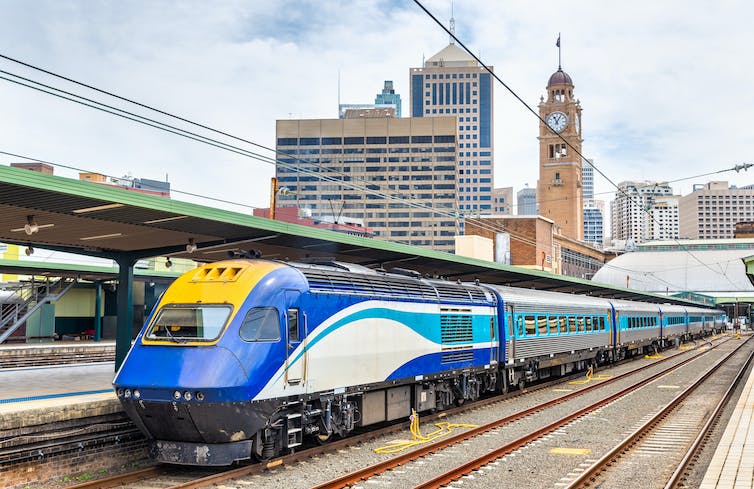 The slow rail service between Sydney and Canberra has been dubbed a ‘national disgrace’. Shutterstock Back to New South Wales NSW has a A$107 billion “infastructure pipeline”. However, on a population basis, Sydney with its metros and motorways is getting much more than its fair share. Regional NSW is getting left behind. The imbalance is increasing. The late 2020 budget allocated billions for the Sydney West Metro and preconstruction work on the dubious Western Harbour Tunnel project. Read more: Is another huge and costly road project really Sydney's best option right now? Many NSW regional communities increasingly consider that their major party MPs haven’t had their best interests at heart. This is one reason for the election in 2019 of four lower house members from minor parties plus one independent. In the recent Upper Hunter byelection, the combined primary vote for the ALP and the Nationals was just over 50%. Serious track work is now needed to lift NSW regional train speeds to those enjoyed in other states. As the Illawarra Rail Fail group sang in this YouTube video, regional NSW needs more trains and faster travel times to get us on our way. The Illawarra Rail Fail group has been campaigning for years for better services to the south coast.