This is an article from Curious Kids, a series for children. The Conversation is asking kids to send in questions they’d like an expert to answer. All questions are welcome – serious, weird or wacky! You might also like the podcast Imagine This, a co-production between ABC KIDS listen and The Conversation, based on Curious Kids.

What sea creature can attack and win over a blue whale? – Drake, age 7, Sydney.

Hi Drake. That is an interesting question.

As you probably know, blue whales are the largest creatures to have ever lived on Earth – bigger than any dinosaur. They can grow up to 30 metres in length and weigh over 150 tonnes. This is very, very BIG. To give you an idea of how big a blue whale is, it’s the size of a Boeing 737 plane! Because of their size, power and speed, adult blue whales have virtually no natural ocean predators.

However, there are very few reports of orcas actually killing blue whales. We know that orca whales interact with them because many blue whales carry scars from the teeth of orcas. But blue whales probably see orcas as more of a pest than a predator. 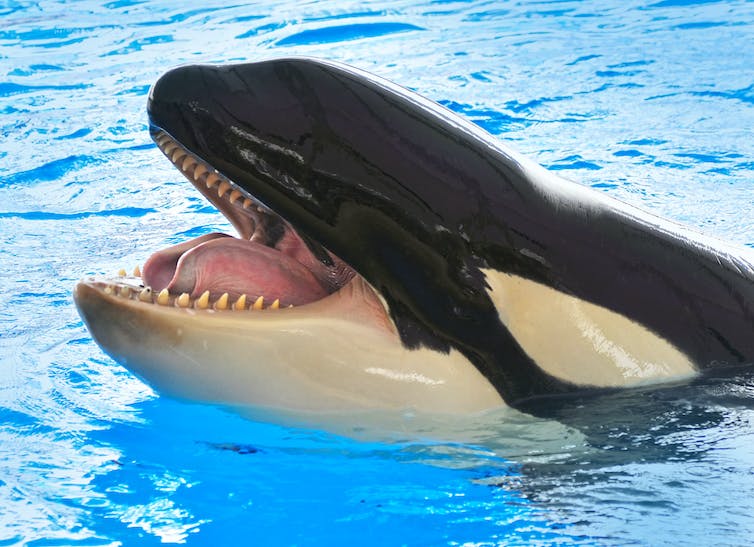 One big problem is what we call “ship strikes”. This is when large ships collide with blue whales causing dreadful wounds and, in many cases, death.

Blue whales migrate freely across all the great oceans of the world to breed. They travel each year to the Antarctic in search of food. Global warming is a major future threat to their way of life. This is because rising sea temperatures and ocean acidification (which are caused by climate change) are likely to cause severe disruption to the production of their main food source, the very small crustacean we call “krill”.

Blue whales were the target of commercial whalers, mainly in Antarctica, between 1900 and the 1970s. During that time, over 330,000 blue whales were killed.

Fortunately - and only just in time - the International Whaling Commission banned commercial whaling in 1966. Blue whales are now a protected species and are recovering from the brink of extinction. People on whale watching trips at various locations around the world can see them, if they are lucky. The risk of whaling still exists in several countries, including Japan, Iceland and Norway. Many people in these countries are seeking to return to commercial whaling. Recently, whalers in Iceland killed a hybrid blue whale.

One of the most interesting things about blue whales is that they use very low frequency sounds to communicate. Through this they can talk to each other over great distances. The low frequency sounds can pass through the earth, so it’s possible to record their songs and sounds from anywhere in the world.

In the 1960s, an American scientist called Chris Clark got permission to use the USA’s submarine listening system across the Atlantic Ocean to listen to blue whales. One day, he heard a blue whale calling from the far northeast Atlantic Ocean and realised another whale many thousands of miles away in the southwest Atlantic Ocean was answering it. Through their calls, he tracked them over the next few weeks moving towards each other. The two blue whales met and spent time together in the middle of the Atlantic. Then they separated and went on their way! 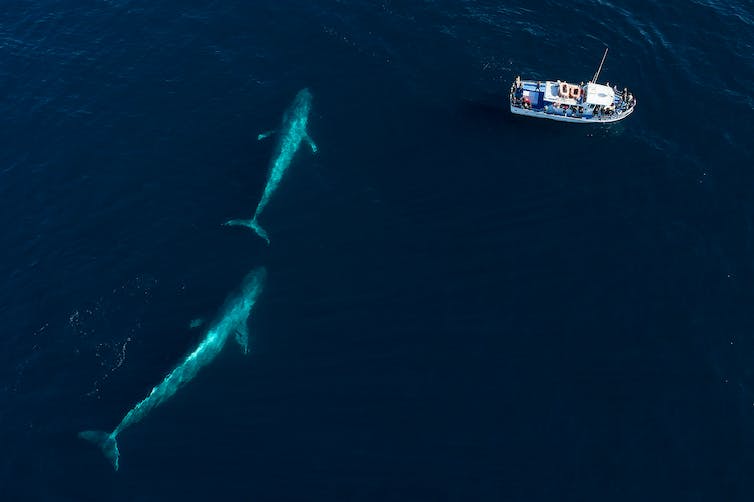 A pair of blue whales swims under the surface in Monterey Bay, California. Shutterstock

It is important for all who are interested in the conservation and protection of these amazing creatures to remain vigilant and involved in making sure that they remain safe. Whales are part of the international heritage of all people of the Earth.

Hello, curious kids! Have you got a question you’d like an expert to answer? Ask an adult to send your question to us. They can:

CC BY-ND Please tell us your name, age, and which city you live in. You can send an audio recording of your question too, if you want. Send as many questions as you like! We won’t be able to answer every question but we will do our best.