What did you have for dinner last night? Might you have made a different choice if you had a simple way to compare the environmental impacts of different foods?

Most people do not recognise the environmental impact of their food choices. Our research, published in Nature Climate Change, shows that even when consumers do stop to think about the greenhouse gas emissions associated with their food, they tend to underestimate it.

Fortunately, our study also points to a potential solution. We found that a simple “carbon label” can nudge consumers in the right direction, just as nutrition information helps to highlight healthier options.

Read more: How to reduce your kitchen's impact on global warming

Most food production is highly industrialised, and has environmental impacts that most people do not consider. In many parts of the world, conversion of land for beef and agricultural production is a major cause of deforestation. Natural gas is a key input in the manufacture of fertiliser. Refrigeration and transportation also depend heavily on fossil fuels.

Meat production is inherently inefficient: fertiliser is used to grow feedstock, but only a small portion of this feed becomes animal protein. It takes about 38 kilograms of plant-based protein to produce 1kg of beef – an efficiency of just 3%. For comparison, pork has 9% efficiency and poultry has 13%.

We could therefore cut greenhouse emissions from food significantly by opting for more vegetarian or vegan meals.

To find out whether consumers appreciate the environmental impact of their food choices, we asked 512 US volunteers to estimate the greenhouse emissions of 19 common foods and 18 typical household appliances.

We told the respondents that a 100-watt incandescent light bulb turned on for 1 hour produces 100 “greenhouse gas emission units”, and asked them to make estimates about the other items using this reference unit. In these terms, a serving of beef produces 2,481 emission units.

As shown below, participants underestimated the true greenhouse gas emissions of foods and appliances in almost every case. For example, the average estimate for a serving of beef was around 130 emission units – more than an order of magnitude less than the true amount. Crucially, foods were much more underestimated than appliances. 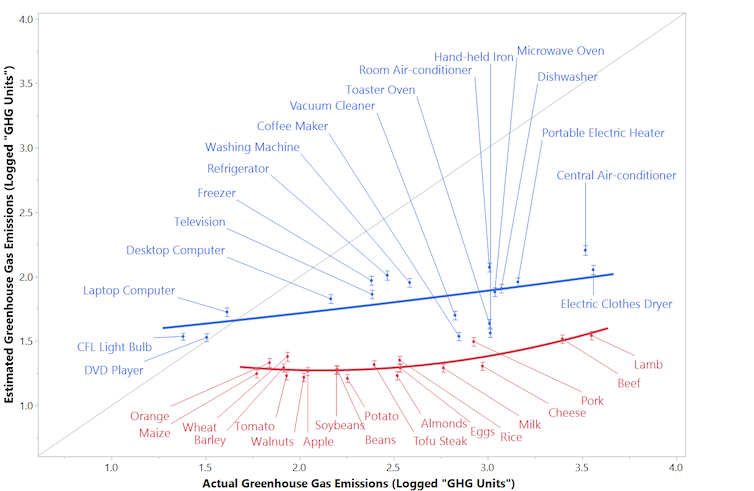 People often overestimate their understanding of common everyday objects and processes. You might think you have a pretty solid idea of how a toilet works, until you are asked to describe it in exact detail.

Food is a similarly familiar but complex phenomenon. We eat it every day, but its production and distribution processes are largely hidden. Unlike appliances, which have energy labels, are plugged into an electrical outlet, emit heat, and generally have clear indications of when they are using electricity, the release of greenhouse gases in the production and transportation of food is invisible.

One way to influence food choice is through labelling. We designed a new carbon label to communicate information about the total amount of greenhouse emissions involved in the production and transport of food.

Drawing on knowledge from the design of existing labels for nutrition, fuel economy and energy efficiency, we came up with the label shown below. It has two key features.

First, it translates greenhouse emissions into a concrete, familiar unit: equivalent number of light bulb minutes. A serving of beef and vegetable soup, for example, is roughly equivalent to a light bulb turned on for 2,127 minutes – or almost 36 hours.

Second, it displays the food’s relative environmental impact compared with other food, on an 11-point scale from green (low impact) to red (high impact). Our serving of beef and vegetable soup rates at 10 on the scale – deep into the red zone – because beef production is so emissions-intensive. 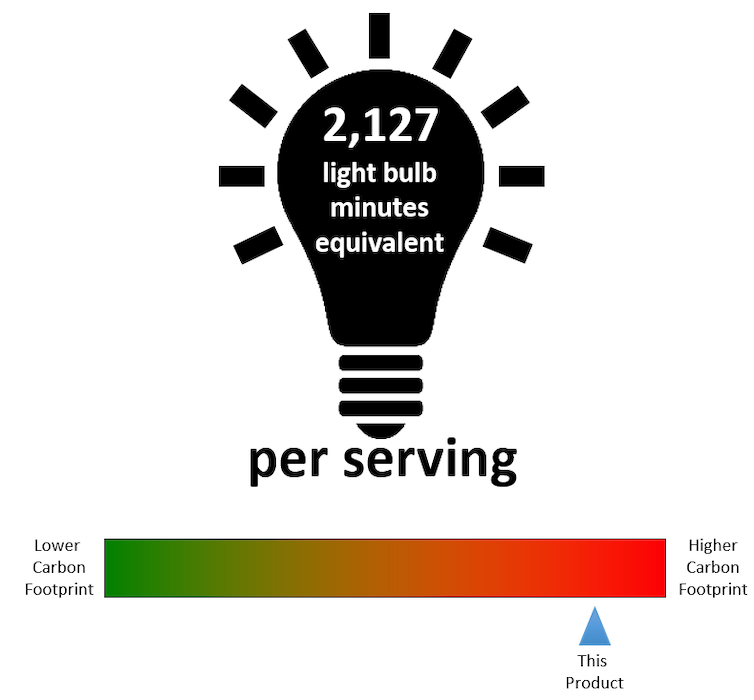 In the can - a carbon label for beef and vegetable soup reveals its high environmental impact.

To test the label, we asked 120 US volunteers to buy cans of soup from a selection of six. Half of the soups contained beef and the other half were vegetarian. Everyone was presented with price and standard nutritional information. Half of the group was also presented with our new carbon labels.

Volunteers who were shown the carbon labels chose significantly fewer beef soup options. Importantly, they also had more accurate perceptions of the relative carbon footprints of the different soups on offer.

Read more: You've heard of a carbon footprint – now it's time to take steps to cut your nitrogen footprint

Figuring out the carbon footprint of every food item is difficult, expensive, and fraught with uncertainty. But we believe a simplified carbon label – perhaps using a traffic light system or showing relative scores for different foods – can help inform and empower consumers to reduce the environmental impact of their food choices.