As Townsville residents continue the clean-up following January’s flooding, microscopic fungi, commonly called mould, will be a concern for many.

Homes and buildings affected by the floods will likely remain inaccessible for a period of time, and with relatively high ambient temperatures and lots of water with nowhere to go, mould will in many cases begin to take hold.

If your home has been affected by water, there are measures you can take to prevent mould from developing. And if the fungi has already started to grow, it’s important to thoroughly remove it – as the presence of mould can affect our health.

Read more: After the floods come the mosquitoes – but the disease risk is more difficult to predict

How does mould develop?

Mould growth begins with water damage. You can generally resolve the problem by fixing the leak, drying the water and installing a fan. These steps should be taken as quickly as possible.

Left unchecked, spores from common fungi such as Penicillium and Aspergillus can germinate within 16 hours, and can grow millimetres a day. Within a few weeks, wet materials can be heavily colonised.

Fungi are more attracted to materials which, at least in their original form, would have been found in the environment. So mould will readily consume many materials in our homes which used to be plants, such as timber and cardboard. But many fungi aren’t fussy and will happily degrade paints and glue, and grow in dust and dirt found in carpets and insulation.

Often a musty smell is noticeable before we see the signs of brown, green and black discolouration. Most of the time by this point simply wiping the surfaces clean is unlikely to solve the problem.

In terms of mould growth, flood water can be more problematic than clean water, as it will have picked up dirt, sewage and other nutrient-rich materials along the way. This will not only increase the amount of spores splashed onto surfaces, but also provide a food source for fungi as they begin to multiply. This can make clean-up efforts significantly more difficult.

Getting rid of it

Non-porous materials like ceramics, glass, metal and plastics can be relatively easily cleaned using household detergents, because the mould can’t penetrate and multiply within.

Clothes, curtains and fabric items can usually be laundered or dry cleaned, but items like couches and pillows are frequently impossible to adequately clean once fungi have colonised.

Unfortunately papers and books, plasterboard, insulation, and some wooden items will just need to be replaced. 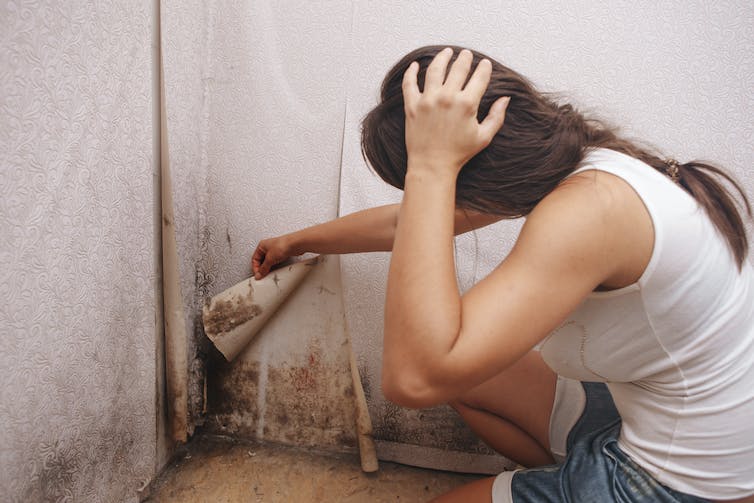 You might be able to clean up some mould yourself. In other cases it may be better to seek professional help. From shutterstock.com

Wiping mould growth off a ceiling or wall using household cleaning products may be effective on small areas not impacted by flood waters. However for areas larger than a square metre with heavy growth or impacted by dirty water, regular cleaning will simply remove the spores from the surface, leaving the material colonised by mould underneath.

There’s no easy fix in these cases, particularly if buildings have been left closed up and wet for several weeks. It’s frequently more time and cost efficient to replace the damaged areas than attempt to scrub, bleach, vacuum and repaint an entire home.

Aside from the cosmetic aspect of mould, there are health concerns which may arise from fungi-contaminated buildings.

Fungal spores and cells often act as allergens. When inhaled, they can cause shortness of breath and cold and flu-like symptoms as well as itchy eyes and skin.

Fortunately, inhaled spores rarely cause genuine infection, with most healthy individuals being at very low risk of developing further illness.

Read more: Is your home harming you? Asthma, allergies and indoor mould

Another area we’re beginning to understand more is mycotoxins – the toxic compounds produced by some fungi as they grow. Imported food products are tested for mycotoxins frequently, but it’s more difficult to test their risk in indoor air.

Not all fungi produce these toxic metabolites, and there’s no simple test or mould colour that can tell you if you’ve got one of the bad ones growing in your home. It generally requires experts to sample the spores and determine what species of fungi is present.

We also don’t know much about the behaviour of mycotoxins in buildings – how many accumulate in different materials – or have any simple ways to remove them once they turn up.

For most people with low level mould problems, mycotoxins will not be an issue. But after large scale water damage events like flooding, explosive mould growth may produce concentrations of toxins high enough to pose a risk of severe respiratory distress, bleeding from the lungs, inflammation, cognitive impairment, or cancer.

Although this may sound frightening, if you’re able to fix the moisture first, mould shouldn’t be an issue. But it’s important to be thorough. Wall cavities, roof spaces and insulation will hold onto water.

If mould does develop, small amounts can be conquered – particularly on hard surfaces or items that can be thrown away. Wear gloves, a dust mask or respirator, and long sleeved clothes when tackling a clean-up.

Seek expert advice early to deal with large scale growth (more than one square metre), or to determine how best to proceed when drying your home to make sure it stays fungi free.