Australians belonging to the vaccine refusal movement consider themselves a science advocacy group, according to a study published today.

My colleagues and I found this group believes it lobbies for unbiased research against increasing industry interference. We also found vaccine refusers construct their identities around developing health literacy, engaging with science and being informed when making decisions about their health.

Other research shows people who refuse vaccines seek to take control of their health decisions. And conversely, they think people who follow public health advice to vaccinate lose out by not educating themselves.

It may be tempting to dismiss these self-perceptions. But that would be to miss the point.

The vaccine refusal movement is a loosely connected community that organises to resist vaccination programs. Not all Australians who refuse vaccines are part of the movement. There is great diversity in the extent to which people refuse vaccines, and in their reasons for doing so.

Refusing vaccines is risky, and it can be linked to problematic health beliefs and behaviours. But people who refuse vaccines also embody many traits we desire among modern patients, including seeking to be informed, engaged and empowered in their health decision-making. 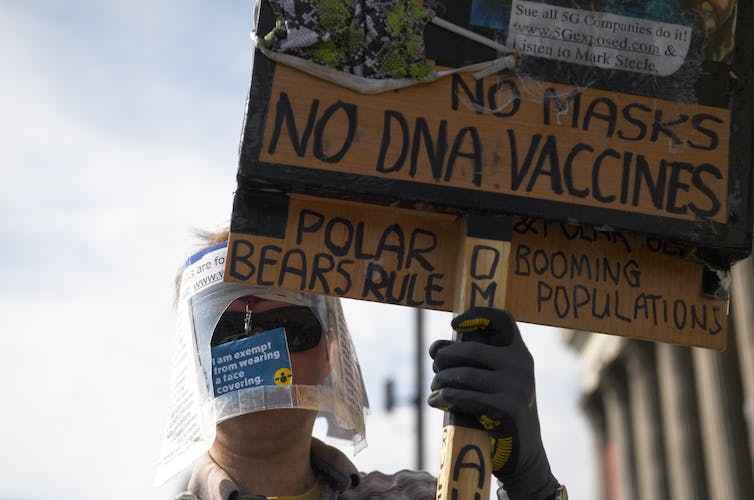 Australians who refuse vaccines tend to have higher health literacy than the average citizen. Neil Hall/EPA/AAP

Health literacy means having the knowledge and skills to find, understand and use health information.

The public and policy makers often treat health literacy as an antidote to health conspiracy movements like the vaccine-refusal movement.

Pro-vaccine Australians generally think vaccine misinformation is only accepted by people who are too foolish or too health illiterate to know better.

The president of the Australian Medical Association, in response to growing vaccine refusal, called in May for educational resources to help Australians “differentiate the good from the bad and the downright deadly”.

Read more: Why people believe in conspiracy theories – and how to change their minds

Some researchers have called for improving health literacy to fight vaccine refusal, and many vaccine promotion strategies rely on improving knowledge and understanding.

After all, it makes a lot of sense. Increased public health literacy often leads to improved health. Evidence suggests it can correct some beliefs in health misinformation. It’s easy to assume that all Australians would be pro-vaccine, if only they had adequate health literacy and critical thinking

As far as we know, people who refuse vaccines use their health literacy skills to dive deeper into vaccine information, develop more sophisticated views and greater confidence in those views.

Read more: Young men are more likely to believe COVID-19 myths. So how do we actually reach them?

Vaccine refusers’ “pro-science, health literate” identity is not benign. In their eyes, it makes them highly credible, which helps them resist public health messages. It also makes them look more credible to others, who may in turn be persuaded to question vaccines.

We need to understand the limitations of health literacy

People who refuse vaccines sometimes hold different health beliefs compared with people who accept vaccination, and lean towards conspiracies (though sometimes they don’t).

But their views are built on mainstream trends. These include trends towards consumer-driven health care, exposure to alternative health paradigms, distrust in “big pharma” and in government.

Read more: Why QAnon is attracting so many followers in Australia — and how it can be countered

We undoubtedly need higher public health literacy in Australia. It has clear and well established benefits. But the vaccine-refusal movement shows we may be placing too much faith in health literacy as a solution for health misinformation. It also shows we need to understand its potential to lead some people to internalise harmful health beliefs.

This understanding is sorely needed amid the COVID-19 “infodemic”, where we are confronted with an overwhelming amount of health information. It’s particularly crucial given the public needs to understand and accept credible information to follow public health directives to slow the spread of the virus.