Wild elephants are awe-inspiring — even if they’re trying to kill you, as I discovered in 2004.

At the time I was studying how poachers and loggers threaten native mammals in Africa’s Congo Basin. I was sneaking up on a herd of forest elephants when they suddenly charged, rushing at me like enraged, out-of-control bulldozers. With the angry animals hot on my heels, I barely escaped by diving into a tangle of vines, shuddering with fear but oddly enthralled by it all, too.

Many residents of southern China must be feeling similarly. A herd of 15 Asian elephants, led by adult females, departed last year from Xishuangbanna National Nature Reserve, near China’s border with Myanmar and Laos. Since then they’ve travelled about 500 kilometres northward, and are now approaching the bustling city of Kunming and its seven million inhabitants.

No one knows exactly where the elephants are going, or why. But two things are clear: the elephants were probably struggling to survive in their native habitat, and Chinese efforts to save the elephants clash with the nation’s aggressive strategies of investment and global development.

Hope for the homeless

As I’ve seen elsewhere, in Africa and Southeast Asia, hungry wild elephants can severely damage human crops, flattening gardens and orchards in their quest for a free meal.

During their sojourn in China, the behemoths — which can weigh over five tonnes as adults (more than three cars) — have indeed been helping themselves to farmers’ crops and anything else they deem edible from local villages and townships. In fact, they’ve caused more than US$1 million in damage to crops so far.

This whole journey has captured the imagination of millions of Chinese citizens, with state broadcaster CCTV carrying a 24-hour live feed of the spectacle. 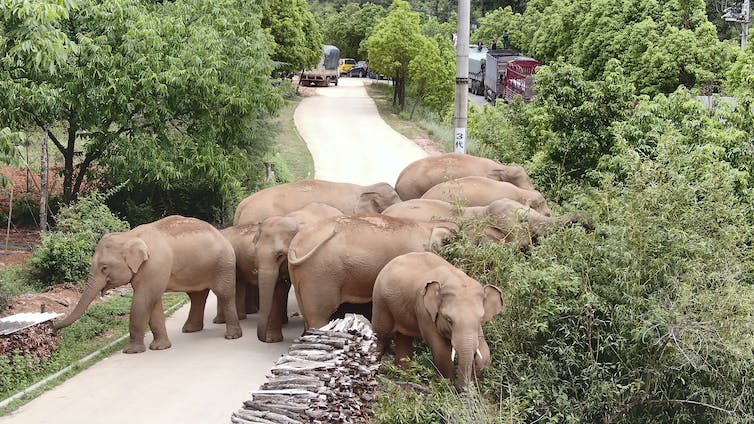 At first blush, this sounds like a scenario that could go very badly for the elephants. When pachyderms and people collide, elephants usually lose.

But hope remains for the wandering herd. Asian elephants are a legally protected species in China.

Hundreds of police officers assisted by drones have been monitoring the intrepid animals, while wildlife officials are trying to steer them away from populated areas with food baits and roadblocks involving hundreds of trucks. So far, some 3,500 people have been evacuated temporarily to clear a path for the elephants.

Such efforts are laudable but misplaced. They address only the symptoms of environmental stress (displaced elephants) but not the “diseases” afflicting elephants in China and beyond.

Firstly, the wandering elephants may well have been forced to move because their home in southern China has been devastated by human development.

Even 15 years ago, when I first visited the Xishuangbanna region, the native rainforests there were being devastated, especially by clearing for exotic rubber-tree plantations. 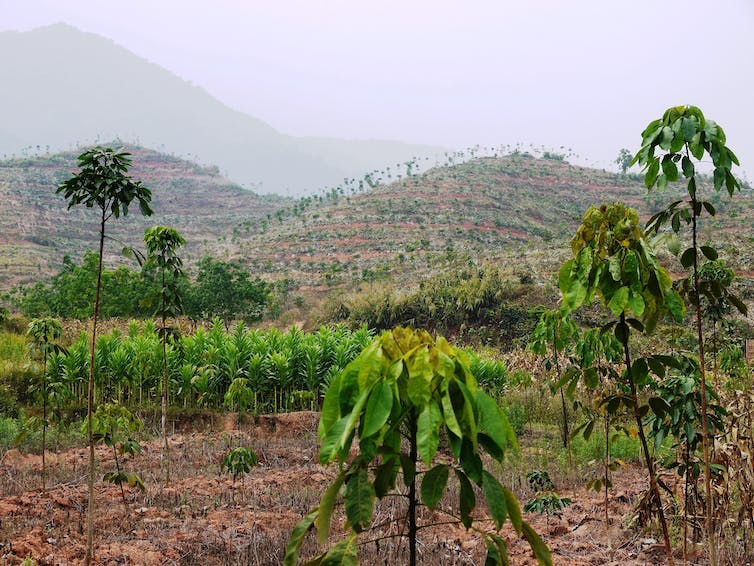 In southern China, most native rainforests have been felled for crops such as rubber-tree plantations, as shown here in the Xishuangbanna region. William Laurance

As a result, only about 300 wild elephants survive in all of China today.

Secondly, even with government efforts since 2018 to ban domestic ivory trading, illegal ivory is still being consumed at a terrifying rate.

This bloody trade is one of the main drivers of elephant poaching in Asia and Africa. Chinese citizens working overseas have been widely implicated in wildlife smuggling activities, including illegal ivory.

Finally, as it promotes new roads, dams and other large developments, China’s Belt & Road Initiative, which now spans 139 nations worldwide, is rapidly increasing the effects of habitat destruction and human persecution on elephants and other native wildlife.

In Latin America, for example, entrepreneurs and workers from China are causing a dramatic increase in illegal poaching of jaguars, the teeth and body parts of which are being used to produce certain traditional Chinese “medicines”. 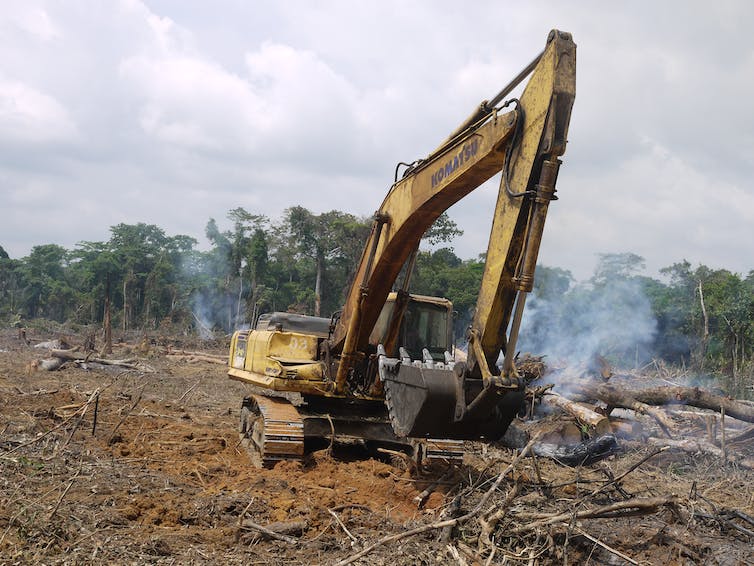 What can we learn from China’s wandering elephants? At the outset, it’s clear many people, in China and beyond, are motivated far more easily by large, charismatic animals such as elephants than they are by rather nebulous concepts like ecosystem loss and degradation.

So, as we seek environmental sustainability in our densely populated world, we need to tell more evocative stories that inspire hope and capture the popular imagination.

The potential habitat for elephants in China has been severely reduced and fragmented, and now totals less than 250,000 hectares overall in the critical Xishuangbanna region.

Globally, scores of large-bodied species such as elephants and apex predators such as tigers are in big trouble because of the fatal one-two punch of habitat destruction and human persecution. To sustain these iconic species, we urgently need to conserve Earth’s remaining large ecosystems.

Further, China’s homeless elephants could give us a glimpse into the future. On a planet where most native ecosystems are being sliced and diced to meet humanity’s needs, and where the climate is changing apace, wild animals like the Chinese elephants may increasingly need to pull up roots and move to new territories. 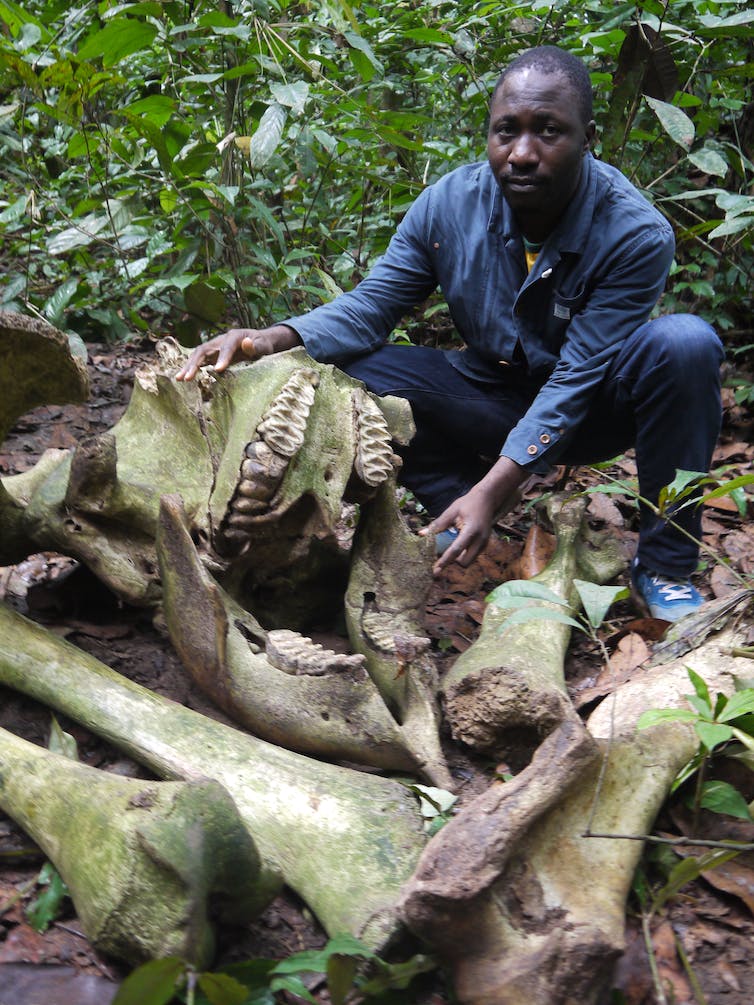 A forest elephant killed by poachers in the Republic of Congo. The animal’s face was hacked off with machetes to remove its valuable ivory tusks. William Laurance

At great expense and effort, China is attempting to save its beleaguered band of elephants as they search for a new home.

But as the nation responsible for more habitat destruction, wildlife poaching and greenhouse-gas emissions than any other, China bears a special responsibility to promote sustainable development — not just inside China but overseas as well.

Let’s applaud China’s efforts to save its wandering elephants while we bear in mind that, as a nation and economic superpower, it has far more left to do to ensure our planet remains liveable for vulnerable wildlife — and for us too.