New data recording the past 1,500 years of flows in the Brisbane River have revealed that South-East Queensland’s climate – once assumed to be largely stable – is in fact highly variable.

Until now, we have only had access to 200 years of weather records in South-East Queensland. But our new research used marine sediment cores (dirt from the bottom of the ocean) to reconstruct stream flows and rainfall over past millennia.

This shows that long droughts and regular floods are both prominent features in South-East Queensland’s climate.

This is concerning. Decisions about where we build infrastructure and how we use water have been based on the assumption that our climate – especially rainfall – is relatively stable.

Read more: Old floods show Brisbane's next big wet might be closer than we think

Archives of past climates

Natural archives of climate are preserved within things such as tree rings, coral skeletons, ice cores, lake or marine sediments. Examining them lets us extend our climate records back beyond documented history.

We can then undertake water planning in the context of a longer record of climate, instead of our short-term instrumental records.

In this study, we used sediment cores from Moreton Bay (next to the mouth of the Brisbane River) to reconstruct the river’s flow over the past 1,500 years. In these cores we measured various indicators of fresh water to reconstruct a record of streamflow and regional rainfall.

At the turn of the last millennium the region was in the middle of a prolonged dry spell that lasted some six centuries, from roughly the year 600 to 1200. After about 1350 the region became gradually wetter, with peaks revealing a series of extreme floods in the late 1600s and early 1700s. Large floods in the 1700s have also been documented in the upper reaches of the catchment, in the Lockyer Valley.

These broad shifts in regional rainfall and streamflow are linked to drivers of global climates, including hemispheric cooling and the El Niño-Southern Oscillation.

A cool La Niña-dominant climate that persisted from roughly 1350 until 1750 caused increased rainfall and reduced evaporation.

In addition, the southward displacement of monsoon troughs at this time may have increased the likelihood of cyclone-related weather systems reaching southern Queensland.

This information helps us contextualise the climate of the last 200 years and gives us some insights into how regional rainfall responds to shifts in global climate.

Over the past 20 years, South-East Queensland has experienced its fair share of extreme weather events. Severe floods have caused deaths and damaged infrastructure. Flooding cost the Australian economy some A$30 billion in 2011. 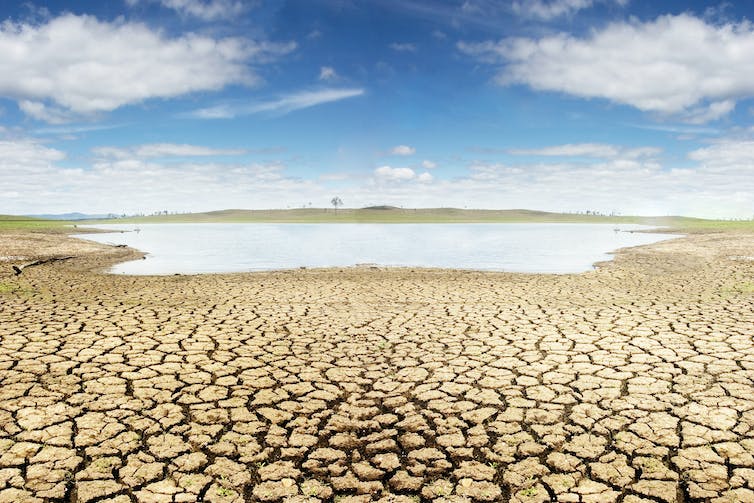 The millennium drought, which in this region was most severe from 2003-08, resulted in widespread water shortages. This prompted major investment in the South-East Queensland Water Grid, a connected network of dams, water treatment plants, reservoirs, pump stations and pipelines.

So far Queensland has coped with everything Mother Nature has thrown at it. But what if extreme floods and droughts became the norm rather than the exception?

Read more: Floods don't occur randomly, so why do we still plan as if they do?

Water quality is getting worse

The 2011 and 2013 floods highlighted the vulnerability to these extreme events of Brisbane’s major water treatment facility at Mt Crosby. The drinking water supply to the city in 2013 became too muddy for purification. The 2011 flood was also alarmingly muddy.

Such events also threaten the ecosystem health of downstream waterways, including the iconic Moreton Bay

Our reconstruction found that big floods over the past 1,500 years rivalled the size of floods in recorded history (1893, 1974 and 2011), but the level of sediment in the water of more recent floods seems to be unprecedented.

This indicates that historical and ongoing land-use changes in the Brisbane River catchment are contributing to more abrupt and erosive floods.

This will continue unless better land management techniques are adopted to improve the resilience of catchments to extreme weather events.

What does this mean for the future?

We are learning that over the last millennium natural climate and rainfall have been more variable than previously thought. This means that modern anthropogenic climate change may be exacerbated by a background of already high natural climate variability.

In addition, our water infrastructure has been built based on a narrow understanding of natural climate variability, limited to the last 200 years. This may mean the quantity of reliable long-term freshwater resources in eastern Australia has been overestimated.

Read more: Droughts & flooding rains: what is due to climate change?