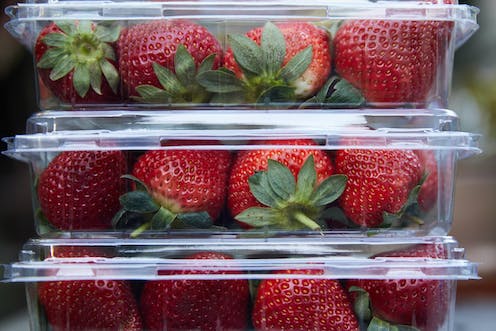 Last week, authorities urged consumers in Queensland, NSW and Victoria to throw away strawberries from two Queensland brands after needles were discovered in punnets purchased at a Woolworths.

Since then, the localised fruit tampering has mushroomed into a major health scare. Needles have been discovered in six different brands of strawberries, as well as apples and bananas, across six states.

And on Wednesday, Prime Minister Scott Morrison announced harsher penalties for those tampering with fruit, increasing the maximum prison sentence from 10 to 15 years.

As the tampering has spread, a word has repeatedly popped up in media coverage: “copycat”. Police have yet to identify the culprits behind any of the incidents or a possible motive, but they haven’t discounted the possibility of copycat crimes being committed.

What is a copycat crime?

Crimes that are inspired by a previous act are commonly referred to as copycat crimes. The offenders typically incorporate some aspect of a previous crime into their own actions, such as how they choose or approach their victims, or the methods they use.

In some instances, crimes with basic similarities are also described as copycat simply by virtue of their proximity in time.

To determine whether an incident may really involve copycatting, however, involves at least three steps:

With regard to the ongoing fruit tampering in Australia, it has yet to be established if different people are responsible for the crimes, though the geographically widespread nature of the cases makes it unlikely that a single individual or group is responsible.

On the second point, the risk of injury to consumers and the rarity of food tampering in general means that cases of this type are unlikely to go unreported.

And if more than one person is involved, the third point might be assumed due to the media saturation of stories about sabotaged strawberries.

The key characteristic of true copycat behaviour is the presence of media exposure describing the original crime. But the motivation behind the criminal behaviour is also important.

Being inspired to commit a crime by the behaviour of someone else is generally referred to as a “contagion effect” rather than a copycat crime, although the public tends to use these descriptors interchangeably.

Many theorists working in this area are careful to note that while media depictions of criminal behaviour can be copied, they are unlikely to cause criminality.

In other words, someone who wasn’t already motivated to commit a crime wouldn’t suddenly become motivated to do so just because he or she saw something in a newspaper. A contagion effect is therefore rare.

A copycat crime involves a person using real life or fictional media depictions to inform the specifics of their existing criminal behaviour or future plans. For example, at least three spree killings committed by young couples around the world have been linked to the film Natural Born Killers. The couples used methods similar to those in the movie and provided justifications similar to those of the fictional offenders.

The available research on copycat crimes generally discusses the impact of media on violent behaviour more generally. The evidence suggests that those who watch violent films and television or play violent video games are more likely to learn specific techniques for violence, understand when violence is accepted by society and develop attitudes supportive of aggressive behaviour.

Although many people have the potential to be influenced by the media, those viewing violent content in childhood may be particularly susceptible to aggressive behaviours, especially if they also have models of violence in their lives.

Read more: The media need to think twice about how they portray mass shooters

There appear to be some personal characteristics that make people more prone to copycat behaviour, too. For instance, those who have an avid interest in crime reporting, as well as those who favour video games and the internet over other types of media, are generally more susceptible to copycat crimes.

A person’s criminal history is also thought to influence whether he or she will attempt a copycat crime. Other factors also include low self-control, high innovativeness, disinhibition and a propensity for sensation-seeking.

Why do people perpetrate copycat crime?

Research on copycat crimes has found a catalyst effect by the media. This means copycat criminals are already motivated to commit an offence, and use media coverage of a previous crime for instructions or ideas.

The underlying motivations are therefore likely to be as various as general criminal motivations, including revenge, thrill, hatred, concealment of other criminality, material gain or jealousy.

In the case of alleged copycat food tampering, this means that motivations would differ from perpetrator to perpetrator.

Read more: Grand Theft Auto doesn't cause crime, but poverty and alienation will

For example, someone may be motivated by a desire to exact revenge on employers or ex-employers. Their motivation might be to make a political statement about the rights and treatment of farm workers, to conceal another crime, to profit financially by suing fruit companies or supermarkets, to gain attention or bragging rights, or perhaps, because of the excitement the behaviour involves.

Since so little is known about what causes copycat crime, preventing and predicting it is difficult. This means that if copycat fruit tampering is happening in Australia, it is likely to persist or even increase for a period of time until someone is caught or the media saturation dies down.

In the meantime, the risk to the public and impacts on struggling farmers will, unfortunately, continue.