Upstage, taking up a quarter of the floor, a heftily constructed Federation-style staircase: a few steps up to a landing, an abrupt turn, and a flight ascending towards the low ceiling of the theatre.

Tosca floats through the space: the room is tasteful, refined, moneyed.

This is the house of retired judge Roger (Andrew McFarlane) and his wife, Sue (Belinda Giblin). The table is set for Roger’s 70th birthday party.

Almost immediately, their eldest daughter Lisa (Danielle King) – a divorced advocate for asylum seekers – storms onto the stage. With her is Saba (Sabryna Walters), a young woman medevac-ed from Nauru. She is now a fugitive from Border Protection, which, contrary to consulting psychiatrists’ advice, wants to return her to offshore detention.

Their son Michael (Jamie Oxenbould), a divorced born-again Hillsonger arrives and, shortly afterwards, their younger daughter Emily (Ella Prince) with her fiancée, Noelene (Bishanyia Vincent), who is also the skipper of the Border Protection boat on which Emily serves. 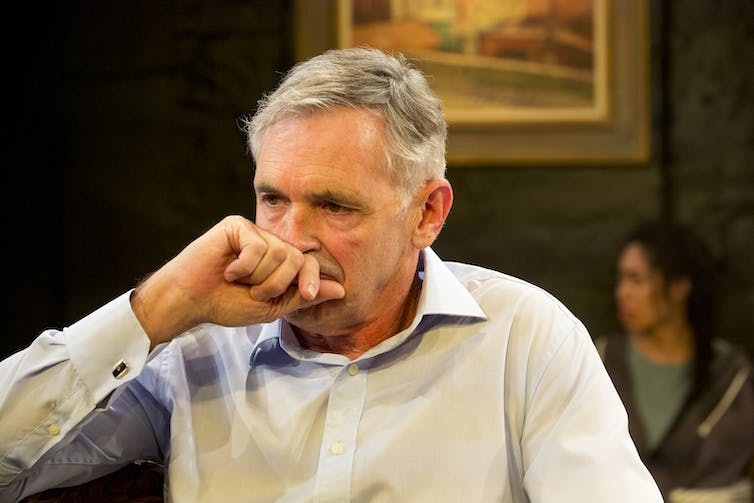 Smack-down one-liners pepper slabs of soapbox rhetoric, laced with Fox news righteousness on the one hand and Saturday Paper wokedness on the other. Positions are taken and rebuked; (unlikely) alliances form, break, reconfigure. Tempers flare. Past injuries and long-harboured resentments fly; lines are drawn in sand and ultimatums delivered.

The whole thing escalates into a shouting match, a caterwauling pile-on of overlapping yells and screeches.

The veneer of middle-class suburban comfort and achievement shatters, revealing a catastrophic failure of values. Everyone is damaged, marriages and relationships in tatters; ill-informed at worst, partisan on a more generous account.

Read more: The Great Australian Plays: Williamson, Hibberd and the better angels of our country's nature

Everyone is scared: of losing their job, their reputation, their life’s work, of breaking the law (after a lifetime, Roger explains, of upholding it). Of being alone, unwanted; of not having a future.

Characters set off up the stairs, but get nowhere. The gentle retirement Roger has anticipated, surrounded by family reminiscing warmly about the good times, is shown up as a chimera: there were no good times, only jealousy, neglect and fear.

“All this shouting is getting us nowhere!” someone yells. The clamour fades. In the welcome silence, Saba moves to the apex of the Stables stage and tells it like it is.

She speaks of real suffering, of the experience of being at sea and on Nauru, of the callous indifference and violence of Border Protection officers. 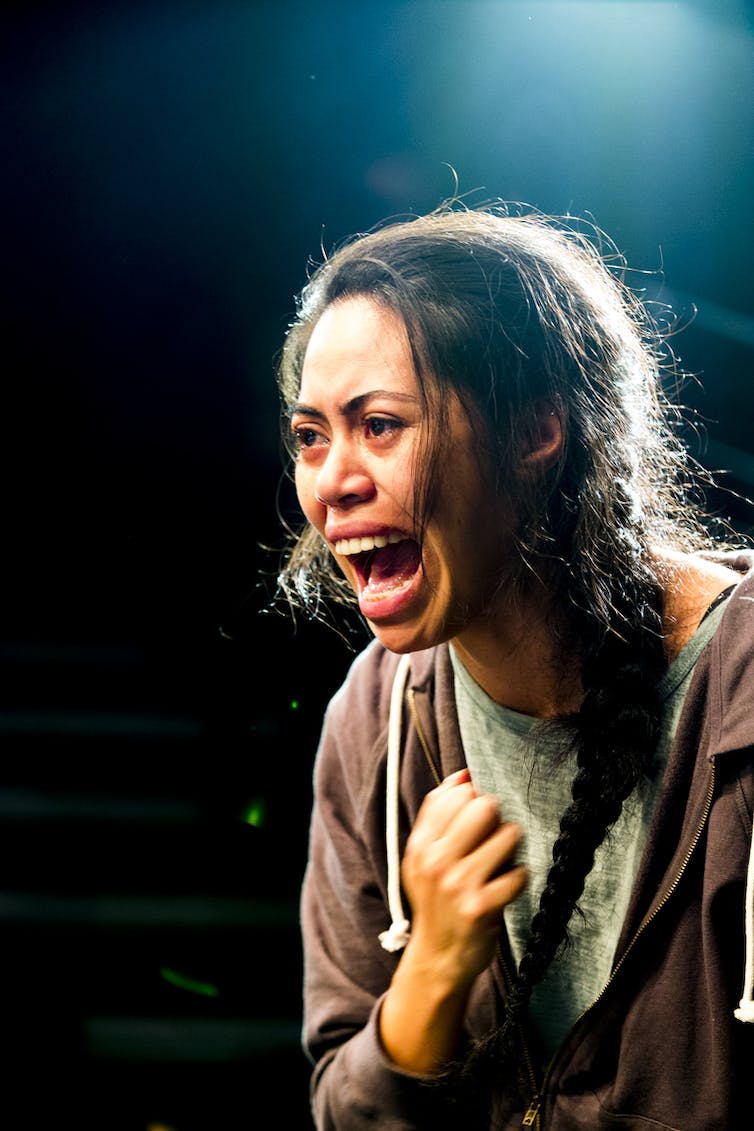 Our domestic squabbles are bluntly implicated. Our carefully nurtured internecine (and Oedipal) grievances, our vanities, our pride — synecdoches for the poverty and empty stridency of our domestic politics — show us up, by contrast, as sooks.

Confronted by someone for whom the future has been foreclosed, for whom there is simply no hope, what do we make of our petty struggles?

Family Values is uncomfortable, confronting work, rendered with care, intelligence and a carefully tempered earnest exuberance by an outstanding cast.

Director Lee Lewis — at first blush an unlikely director for a new Williamson — is at the top of her game, deftly choreographing the ebb and flow of alliances, affording gag lines just enough space without sacrificing pace or yielding to gagging.

Lewis’s feel for the Stables theatre, fine-tuned over a remarkable tenure at the helm of Griffin, is pitch perfect. Amid the clamour of polemic and shifting allegiances the slightest nuance of gesture, shift of eyeline, or movement through the space reads with clarity and precision.

Lewis never allows us to lose sight of each character’s integrity, nowhere more emphatically than with Oxenbould’s Michael, deftly managing the line between parodic righteousness and disarming humility.

A plea for mobilisation

In the end, privilege is mobilised and matters resolved.

Apologies are tendered. Not all are accepted — things are never so easily resolved — although a bit of transactional barter seals the deal (for now). We are left gazing at the dining table, at the massive staircase — a Jacob’s Ladder no-one is able to ascend.

What are we all doing here?

How can we resolve the fundamental injustices of our times when we are all so imbricated in them?

Williamson suggests only through mobilising our own frequently ill-won privilege might we throw off the violence to which we subject others, to which we are ourselves subjected.

He — and Lewis — know their audience: we have heard nothing over the 90 minutes of the drama we do not already know. As we walk away through the dust and smoke-streaked summer night we ask ourselves not “What would we do in that situation?”, but simply, and more urgently, “What are we doing?”

Family Values is at Griffin Theatre Company until March 7.